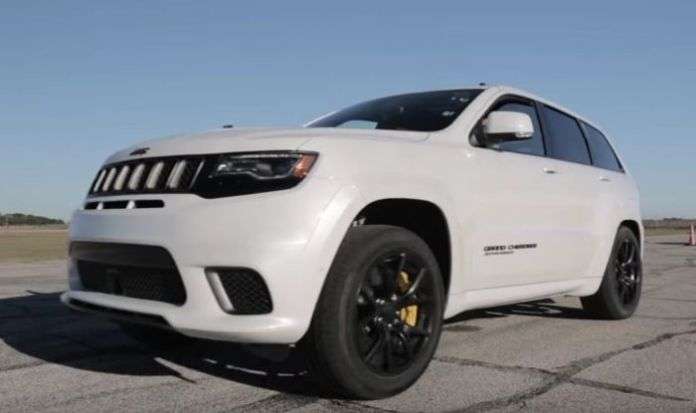 Why Hennessey's Jeep Trackhawk Testing is More Impressive than You Think

Hennessey Performance recently got their hands on a brand new 2018 Jeep Grand Cherokee Trackhawk, putting it through the paces on a quarter mile test track with only 41 miles on the odometer – turning in impressive performance times without the Torque Reserve and Launch Control systems.
Advertisement

The 2018 Jeep Grand Cherokee Trackhawk is the quickest, fastest and most powerful SUV sold in the world right now. The Trail Rated automaker promises stock quarter mile times in the mid-11s and the ability to sprint from 0-60 in 3.5 seconds, but in my time testing the 707 horsepower SUV, I was able to pull down a 3.4-second 0-60 dash with a passenger and a bit of wheelspin on the launch.

Hennessey Performance is great about getting ahold of hot, new performance vehicles and putting them through some basic performance tests, so it came as no surprise that the Texas-based tuner made a dyno run and a few runs down the track. They also raced the Trackhawk against a Hellcat Challenger, with the supercharged Jeep beating the supercharged Dodge by a comfortable margin.

However, in their quarter mile testing video, Hennessey didn’t turn in very good numbers with the Trackhawk and some critics of the 707hp Jeep were quick to insist that the vehicle isn’t all that it is cracked up to be. What most people fail to notice is that the Trackhawk in the Hennessey video only has 41 miles on the odometer, meaning that all of the high performance features are not yet available, as the vehicle is still in its initial break-in period.

Trackhawk’s Big Torque Launch
The 2018 Jeep Grand Cherokee Trackhawk features a unique Launch Control system that includes a similar Torque Reserve system to the one in the new Dodge Demon. This system allows the Trackhawk to build boost while the vehicle is stationary, leading to far greater torque levels at the point of launch. This pre-loading system plays a key role in helping the supercharged Jeep run 3.4 0-60 times and 11-second quarter mile times, but this feature doesn’t unlock until the vehicle ends its break-in period at 500 miles.

Without the Launch Control system with Torque Reserve, the Trackhawk isn’t able to launch nearly as hard as it was when the media was turning in 3.3-3.4 0-60 times at the first drive program. In the Hennessey video, the driver is launching the vehicle simply by rolling into the throttle with the brakes engaged, then flooring the throttle as the brake is released. With this type of launch, there is no boost being built and the vehicle launches at a much lower initial torque level.

Even with that disadvantage, Hennessey was able to hit 60 in 3.6 seconds with the Trackhawk while running the 8th mile in 7.7 seconds and the quarter mile in 12 seconds flat. They ran these same numbers back to back, so it is a legit set of figures, but once this Jeep hits 501 miles, we should expect a new video with significantly quicker times. With the Hennessey test driver hitting 60 in 3.6 seconds without Torque Reserve, they should definitely be among the quickest to test the supercharged Jeep when they can use all of the high performance gadgets.

Below, we have included two videos. The first is the video from Hennessey and the second is one that I captured from the Jeep media drive. You can clearly hear the difference in the launch with and without the Launch Control system while also being able to see and hear how much harder the blown Jeep leaves the line in each clip.