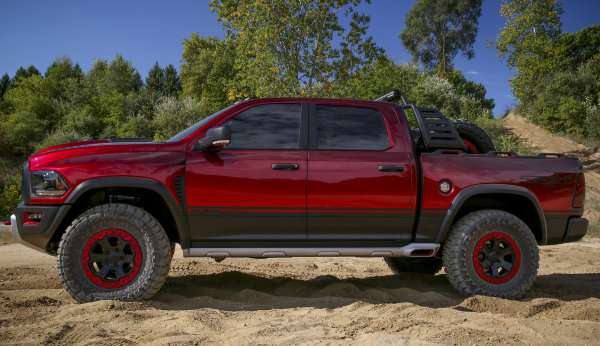 The American performance world was rocked yesterday when FCA introduced their new Hellcat Hemi-powered Ram Rebel TRX Concept, but in looking at the features which make this truck so special – I believe that this incredible performance truck could reach production in pretty much the same form as the image shown above.
Advertisement

Automakers build lots of concept vehicles that they never intend to build and over the years, the individual brands of FCA have offered their fair share of concepts that just couldn’t become production vehicles with massive changes. Some examples include the 2009 Chrysler 200C EV rear wheel drive concept, the 6x6 Dodge Ram T-Rex and the 2011 Dodge Challenger SRT10 Concept – all of which were too outlandish to become production vehicles.

The Ram Rebel TRX Concept might seem as extreme as that Viper-powered Challenger, but in breaking down the features of the Hellcat-powered pickup, I believe that this truck – in a very similar form to the concept – could become a production model in the very near future.
Today, I present you with a breakdown of the key features of the Hellcat-powered Ram Rebel TRX Concept and how I see this truck reaching your local dealership showroom.

Ram Rebel TRX Broken Down
When you first look at the Ram Rebel TRX Concept and the extensive list of unique features, some people might pass this truck off as being too elaborate of a build to become a production reality. However, when you look at the key changes made to the TRX Concept compared to the normal Ram Rebel, this Hellcat-powered pickup is very similar to the Ford F150 Raptor – except with a much more powerful engine.

The Exterior
On the outside, the Ram Rebel TRX Concept has unique front and rear bumpers, a unique hood, a unique grille, headlights with flow-through vents on the outer edge, flared front fenders, flared bedsides, rock rails with integrated exhaust, the Ram gas door, beadlock wheels wrapped in serious off-road rubber and the bed dress-up package, which includes the tire carrier, the light bar with lights and the bedside caps with handles. Realistically, the production truck doesn’t need the light bar (although GMC offers this on the Sierra All Terrain X) or the dual tire rack in the bed, so they could remove that from the Rebel TRX without losing any of the functionality of the package. Also, I am not sure if they could really make a production rock rail/exhaust system setup, but Dodge has used side pipes on the Vipers for years, so they don’t seem too far fetched. 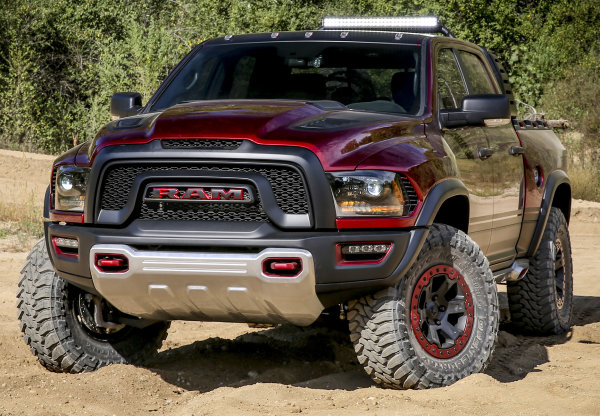 When compared to the Ram 1500 Rebel, the production version of the Ram Rebel TRX would have different hood, grille, bumpers, headlights, fenders, bedsides, beadlock wheels, off-road tires and the gas cap. That seems like an extensive list of changes, but if you look at the features of the new F150 Raptor compared to the other F150 models, the list is very similar. The Raptor has a unique hood, grille, headlights, bumpers, fenders, bedsides, beadlock wheels and off-road tires – meaning that the only difference with the Rebel TRX is that it has a unique gas cap. Scrap that and the Ram Rebel TRX would have the same unique features as the F150 Raptor.

Those changes don’t seem quite as extreme when we see the Raptor – which is guaranteed to be a big seller – sporting similar changes of its own.(More on the next page)

For comparison, the Ford F150 Raptor also has unique control arms with large internal bypass shocks up front and out back, but the Raptor uses a performance leaf spring rather than a rear coil. In other words, the Rebel TRX Concept has similar high performance suspension features to the Raptor, proving that they are all very production-friendly.

One area where the Ram Rebel TRX Concept does differ greatly from the Raptor F150 is in the braking system, as the Ram truck features the same gigantic Brembo brakes from the Hellcat Challenger and Charger. This braking setup features 6 piston front calipers over 15 inch rotors and 4 piston rear calipers over 14 inch rotors – guaranteeing that the high performance pickup can get stopped quickly from high speeds. On the other hand, Ford hasn’t mentioned anything about the brakes of the 2017 Raptor and in looking at pictures of the Raptor at the various auto shows, it appears to have a similar braking setup to the other F150 pickups.

This gives the Ram Rebel TRX a huge advantage, but those big brakes are very expensive, which will add to the final price of the production truck. Fortunately, FCA already has these brakes in the “parts bin”, so they could easily swap them into the high performance pickup.

The Drivetrain
The Ram Rebel TRX Concept is powered by the supercharged 6.2L Hellcat Hemi (although Ram doesn’t use Dodge’s Hellcat name), mated to a heavy duty 8-speed TorqueFlite transmission and a heavy duty Borg Warner 44-45 transfer case. The concept uses the standard Ram 1500 front axle, but a heavy duty Dynatrac Pro 60 rear axle has replaced the standard unit, complete with an electronic locker and 1.5 inch axle shafts (which are longer than stock to accommodate the wider track).

This is the point at which the Ram Rebel TRX and the Ford F150 Raptor really differ the most, and where the most difficulties come in making this a production truck.(More on the next page) The 525 horsepower, 6.2L supercharged Hemi has its obvious advantages over Ford’s 450hp EcoBoost V6, but right now, the Hellcat engines and all of their components are still in fairly high demand. The Hellcat Challenger and Charger are beginning to collect in normal inventory numbers around the country, so there is less of a log jam for the engines or the parts – but there isn’t an abundance of Hellcat engines laying around. This means that the Rebel TRX would likely have to wait until Dodge could allocate some of its supercharged engines to the Ram brand, but it is possible. It would, however, be an expensive engine upgrade, but we will save costs for another discussion. Click here for a closer look at the Hellcat Hemi in the engine bay of this Ram Concept.

The 8-speed TorqueFlite is already a regular feature of the Ram trucks, so the heavy duty application shouldn’t be an issue, although there are some availability issues with those as well. Ultimately, by the time a Hellcat Ram actually hit dealerships, the production constraints of the Charger and Challenger will be long resolved.

Next, we have the Borg Warner 44-45 transfer case and the Dynatrac Pro 60 rear axle of the Ram Rebel TRX Concept. I am not going to pretend to know the cost of either of these items, but I would imagine that they cost more than the standard components in the production Ram Rebel. FCA would either need to come up with an in-house solution or get these components to a reasonable cost in order to include them on a production truck, so this could be a sticking point.

At the same time, it wouldn’t be unusual at all for both the Borg Warner transfer case and the Dynatrac axle to make it into the production Ram Rebel, but that would be another cost-adding issue. These components seem to be necessary in order to handle the power of the Hellcat Hemi, so for this project to move to production – this seems to be the biggest sticking point.

The Interior
Finally, we come to the cockpit of the Ram Rebel TRX Concept, which features unique seats with 6-point racing harnesses, canvas pull straps instead of door handles and a spread of red trim. Really, Ram could put the standard Ram Rebel interior in the TRX and if it still looked like the concept on the outside – people wouldn’t care about the inside. I think that the company could run into some legal issues with the pull strap door handles and I believe that racing harnesses are not always accepted as seat belts by the police, so I don’t think that either of those features would make it to production. However, the cool looking red trim throughout the cabin would be easy to do. In the end, the exterior changes of the Ram Rebel TRX Concept compared to the current Ram 1500 Rebel seem completely production friendly, based on what we have seen from other production trucks on the market. The suspension, wheels and tires are all similar to the Raptor, so they are all production-friendly, and the majority of the drivetrain components are already in use – as are the brakes.(More on the next page)

Provided that Ram can make the Borg Warner transfer case and the Dynatrac rear axle affordable enough for a production truck on their end, I believe that every other feature of the Rebel TRX Concept truck could easily make it onto a production truck.

Most importantly, the Ford F150 Raptor has proven that there is a thriving market for a high performance truck that could be driven to the office on Friday and raced through the woods on Saturday. If Ram built this Hellcat-powered pickup, the Rebel would give prospective buyers a much more power option to Ford’s Raptor with similar off-road capabilities and based on input from the Hellcat owners’ community – people would line up to buy this supercharged Ram.

Steven Beck wrote on July 11, 2017 - 10:22pm Permalink
Really like this truck - and I'm not a truck guy. I had decided when the time was right, I would replace my aging 2003 Chevrolet Blazer ZR-2 with a Jeep Grand Cherokee Trailhawk (because the SRT and Trackhawk are out of my price range), but when I saw this - and the rumors that it will have a $55,000 start price? That's an easy decision to make. 10,000+ lbs of towing, 575 horsepower, guesstimates of 550 lb.-ft of torque and stunning looks and awesome off-road capabilities??? Where do I sign! Yes, the production result will differ, but I can live without side pipes and racing harnesses (though I wish they'd make that an option) and two huge spares eating up the bed space (and if'n ya want two big spares, you buy two big spares). Green Light Thumbs Up from me. #RamRebelTRX all the way.