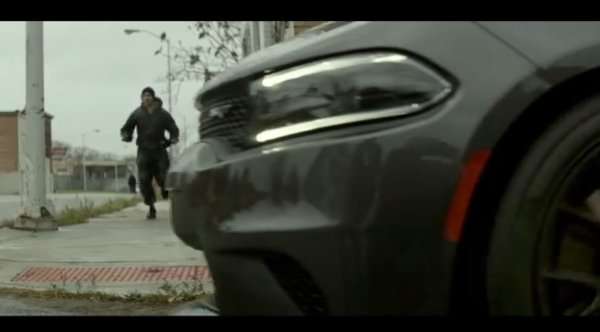 Why Dodge Wants Eminem Fans to Know the Hellcat Charger

Detroit based rapper Eminem has just rolled out the video for his song Guts Over Fear and the 2015 Dodge Charger SRT Hellcat makes a brief cameo appearance – a move which will put the world’s most powerful sedan in front of millions of online viewers.
Advertisement

The face of marketing has changed a great deal with the widespread use of the internet and while cars like the 2015 Dodge Charger SRT Hellcat really sell themselves, the world’s most powerful production sedan is still a vehicle that the company wants to put in front of as many eyes as possible. This is the kind of car that most people won’t buy, but it brings a ton of attention to the brand and some of the people who gain interest in a brand due to a car that they will never own will buy some other Dodge brand vehicle. Essentially, the existence of the Hellcat Charger will help to sell other models – both less powerful Charger models and other Dodge vehicles on the showroom floor.

In much the same way, the vast majority of the people who will sit around and watch Eminem videos on the internet aren’t planning to buy any $70k cars, but the 2015 Dodge Charger SRT Hellcat is one awesome machine and an appearance in a video like this one will help to build “street cred” for both the Charger and the Dodge brand as a whole.

The Mental Connection with Cool
The use of the Dodge Charger SRT Hellcat in the new Eminem video will help to create buzz for both the rapper and the Dodge brand. While not all Dodge fans may be into rap, fans of the Dodge brand will likely find interest in the Eminem video because the Hellcat Charger is shown in the video so they will watch the video to see the car. On the other side of the equation are the millions of Eminem fans, many of whom will be introduced to the Hellcat Charger in a way that could send them searching for details.

Someone who may not have any exposure to the new 2015 Dodge Charger or the 707hp Hellcat package could see this mean looking sedan in a new video of their favorite rapper, so they head to Google to find out what that car is. They learn that it is the 2015 Dodge Challenger SRT Hellcat, and while they aren’t in a position to buy a $70,000+ Hellcat model, they might notice the aesthetic similarities in the rest of the 2015 Charger lineup, so while they might want to buy a Hellcat, they go with the more reasonable daily driver Charger SXT or R/T.

Even those Eminem fans who aren’t in any position to buy a new car right now will see this car in the new Guts Over Fear video and research the car to see what it is. They will read about the Hellcat Charger and while they won’t buy a car right now, it puts that thought way in the back of their brain that the Dodge Charger is cool because it was in an Eminem video and because it has 707 horsepower. Two years later, that person will be looking for a new car and they will find some attraction to the Dodge brand from that positive relation two years earlier – whether they recognize the appearance or not.

While many people learn about cars from normal advertising campaigns, product placement like this one helps to promote an entire brand without the traditional application route. With Eminem being one of the most popular rappers in the world, there will almost surely be millions of people who see the Hellcat Charger for the very first time. Almost none of them will go out and buy a Hellcat Charger, but some of them will go out and buy a 2015 Charger non-Hellcat model and others yet will buy some other Dodge product as a result of this video appearance.

Below is a short clip of the Eminem Guts Over Fear video showing the Hellcat Charger. I have not included the full video, as the language is no safe for work, but searching YouTube for Guts Over Fear Video will quickly bring up the full video featuring the 2015 Charger SRT Hellcat. The video below is safe for everyone, so enjoy!