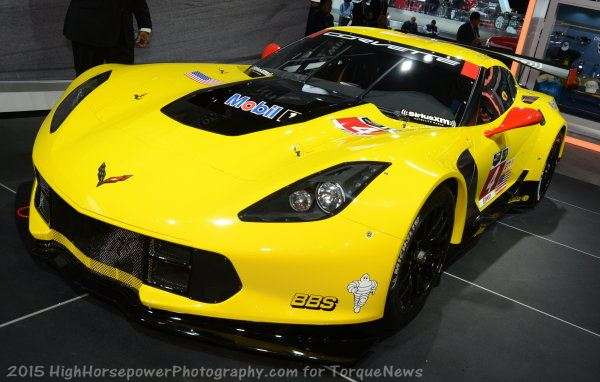 Why the Chevrolet Corvette Still Needs a Proper Track Car

The 2015 Chevrolet Corvette Z06 is the most powerful and, according to General Motors, the most track-capable Corvette of all time, there is still a hole in the Corvette lineup that needs to be filled by a more focused track package – a car that would compete directly with the new Dodge Viper ACR.
Advertisement

The 2015 Chevrolet Corvette Z06 is a truly remarkable machine. From the gorgeous, aerodynamic body to the magnetic suspension system to the 650 horsepower LT4 engine, the new Z06 has been engineered to be a great street car while also being the most track-capable Corvette of all time. The Z06 is beautiful, it is blistering fast and it is packed with all sorts of cutting edge technology inside and out.

There is no question that General Motors did a remarkable job in creating the new Chevrolet Corvette Z06, as they have done a masterful job of matching benchmark performance capabilities with premium sports car comforts. Unfortunately, while the Z06 owners who spend all of their time driving to and from the office don’t have any complaints about their new 650 horsepower supercharged Corvette, those owners and prospective owners who spend lots of time at the track have some complaints with the new Z06.

All of those complaints could be addressed with a new Corvette trimline that is more focused on track time while maintaining the ability to be driven on the road.

C7 Corvette Z06 Complaints
Although the 2015 Chevrolet Corvette Z06 is the most track capable Corvette of all time, track regulars see plenty of room for improvement – improvements that could be featured in a new, more track-focused Corvette.

I spent some time reading through the biggest Corvette community message boards, including both forums and social media groups, and it seems that the key complaints are the high curb weight due to the loaded-up nature of the Z06 package and the fact that the engine pulls power when it reaches the upper end of its operating temperature range.

When the previous Corvette Z06 was introduced, it was a very lightweight package so while it was a road car, it wasn’t equipped like a luxury car on the inside. On the other hand, the new Corvette Z06 comes very well appointed in its base 1LZ form and those standard goodies lead to extra weight – weight from items that you really don’t need to get around a road course. Of course, the previous Corvette Z06 didn’t pull a bunch of power when the engine warmed up either, so those C7 Z06 owners who run long sessions on the road course have to be ready to turn in slower lap times when the car heats up.

Even if you haven’t spent any time on a road course, you can surely imagine how a car weighing a whole lot more and losing power when running for more than a few laps at a time can be a real drag on the road racing experience – and that is why Corvette racers are demanding a more track-focused C7.

The Corvette to Battle the Viper ACR
To answer the pleas of those prospective Corvette owners who want a car that is better suited for track use, General Motors needs to create a package that is similar to the new Dodge Viper ACR. The New American Club Racer (ACR) is street legal, but the vast majority of comforts have been removed while bigger brakes, more aggressive aero bits and unique cooling features have been added to create the most track-capable Dodge Viper. Fortunately, the 2015 Chevrolet Corvette Z06 is so good that GM really doesn’t have a whole lot of work to do in order to better rival the likes of the Dodge Viper ACR.

First and foremost, the GM team needs to figure a way around the engine detune when it gets hot, as that is the biggest road block for a stock C7 Z06 owner looking to spend long days at the track. The Viper ACR doesn’t get more power over the standard Viper and a more aggressive Corvette track car wouldn’t need any more power either – it just needs access to all of the power all of the time, even in stock form.

Next, GM needs to trim some weight from the Corvette Z06, and the best means of doing this would be to cut back on the number of luxury goodies on the inside. While it is nice to have a huge infotainment screen and Bose sound system when driving to and from the track in your new Z06, those items just add weight at the track. Go to a simple sound system, get rid of the power leather seats in favor of lightweight race seats, remove sound deadener and other insulation inside.

Next, make the Z07 package standard on the track-focused Corvette, except with a specially tuned suspension setup that is far more aggressive and stickier tires – perhaps wrapped around lighter rims. In addition to the aero bits of the Z07 package, add on a more aggressive front splitter, a larger rear wing, and dive planes.

Finally, fix the roof in place, which stiffens the chassis even more while also allowing the company to shave a little more weight.

There are plenty of people online who are serious about buying a more track-focused C7 Corvette, but with the steady success of the current Corvette lineup including the new Z06, it might be a year or two before GM goes to the trouble to roll out an even higher performance model. Ultimately, the timing of a more track-capable, less comfortable Corvette Z06 will depend on how soon another car – such as the Viper ACR – beats the new Z06 in a head to head race.

john wilson wrote on July 21, 2015 - 6:56pm Permalink
its not only the American cars they have to compete with a video on you-tube showed a Z36 on a race track and a Mclarne P1 made it look very slow they need to start exploring hyper car design as even the v8 mclaren 675lt is nearly as fast as the 918 porsch
howard altman wrote on July 21, 2015 - 8:15pm Permalink
A cage. You forgot a proper cage. Corvette should have a Cup Car option like the Porsche GT3 cup (and soon to be Cayman GT4 Cup) and the Miata Cup Car.
Isaiah wrote on July 21, 2015 - 10:11pm Permalink
The simple fact of the matter is "People can't always have their cake & eat it too"! The ONLY serious problem with the C7 Z06 is its power pulling ECU. Solve that problem & this will be the BEST all around Vette ever! (Right now, I'd give that Title to the C7 Z51) Aside from the ridiculous notion of a Track Capable Street Car overheating 3-5laps in at the race track, MOST people who buy this won't ever track it which is why I DON'T SEE GM ever taking those complaints seriously enough to fit! Unfortunate, right! However the more serious & likely scenario is taking the Z06 on a long drive on a sunny day & the car overheats/shuts down in the middle of know where, seeing how when traveling in the country or on long road trips which is a far more LIKELY scenario for most drivers as opposed to Tracking the car... Gas stations can be 20-120miles apart & being trapped in between no man's lands NOT BECAUSE OF NO GAS but because ones cars overheated & stopped is a REAL WORLD SCARY ASS proposition for anyone! As far as for it being too heavy, constant power would easily combat that along with the fact it many of the amenities added to the car increasing its weight makes it far more usable of a car all around which is why YES the new ACR is a more TRACK FOCUSED yet the C7Z06 will stomp it into the ground as far as sales which are the bottom line, sorry folks, just being real! Lol