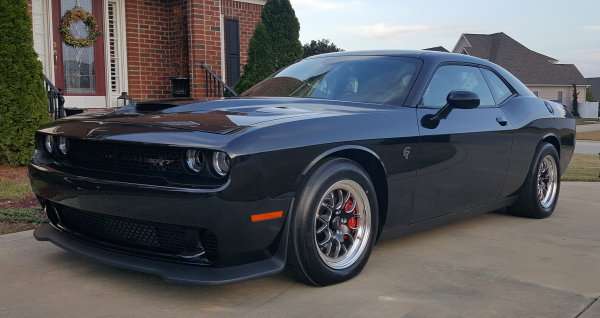 This past weekend, we see new a new record for the quickest Dodge Challenger SRT Hellcat set at the Modern Street Hemi Shootout and after Ricky Ellison set the record with a 9.59, he backed up his record with a 9.58 – in less than ideal conditions and without the aid of nitrous oxide.
Advertisement

Since the Dodge Challenger SRT Hellcat first began reaching customers almost a year ago, we have been closely monitoring their progress in the racing world. With an NHRA certified “stock tire” time of 11.2 and a certified drag radial time of 10.8, the Hellcat Challenger is comfortably the quickest stock muscle car of all time, but since the first supercharged Hemi car was sold – private owners have been working on making their Mopar muscle cars quicker and quicker.

One such owner is Ricky Ellison, who headed to the Modern Street Hemi Shootout this past weekend at Beech Bend Raceway in Kentucky with the hopes of setting a new record for the quickest Hellcat car in the world. Unfortunately, the weather in Kentucky didn’t cooperate, with rain, hail and unseasonably low temperatures, but that didn’t stop Ellison and his Challenger from both setting and backing up a new Hellcat record.

Ricky Ellison’s Hellcat Challenger
The black Dodge Challenger SRT Hellcat shown above is owned by Ricky Ellison of Fort Bragg, North Carolina. Ellison is retired from the Army and currently works for the Department of Defense, but in his spare time, he likes to go very fast in Mopar muscle cars. His “old” Dodge Challenger SRT8 ran in the mid 8-second range, but recently, he has turned his attention to his new Hellcat Challenger.

Ellison’s Hellcat Hemi has been modified with a 10% overdrive lower pulley, a 2.75 upper pulley (resulting in 18 pounds of boost), ID1000 Fuel Injectors, headers and a full exhaust system. Like several of the other ultra-quick Hellcat cars we have featured, this car was tuned by HHP and to both handle the extra power and to make the most of that power – this Challenger has a Driveshaft Shop aluminum driveshaft, front and rear Weld Racing wheels and a set of 17 inch MT drag radials. The car has not been lightened up at all, shy of the racing wheels, and unlike some of the other quick Hellcat cars we have featured - there is no nitrous flowing into this Hemi engine. Ellison’s car is also fitted with the lightning-quick 8-speed automatic transmission, like the rest of the Hellcat cars in the 9-second club.

When Ellison took to the track to make his record run, it was at an event that had been hit with unseasonably cold temperatures, along with rain and hail. Some folks from the event complained that traction was an issue, but it wasn’t much of an issue for Ricky Ellison. He laid down a record run with a time of 9.592 at 141.05 miles per hour, with a 60 foot time of 1.380…in a 4,500+ pound muscle car with street legal tires. The traction couldn’t have been too bad on that run.

That is a factory-built Challenger with an upper and lower pulley swap, bigger fuel injectors, headers, a full exhaust system and a good tune making enough power to run mid 9s at 141mph with street tires and a stronger driveshaft. Mind you, that requires the key “good driver mod”, but for those who know how to get off of the line, this car is a clear example of what kind of numbers you can lay down with very, very minimal modifications.

The video below shows Ellison’s 9.58 run, so crank up your speakers and watch the world’s quickest Hellcat Challenger in action.