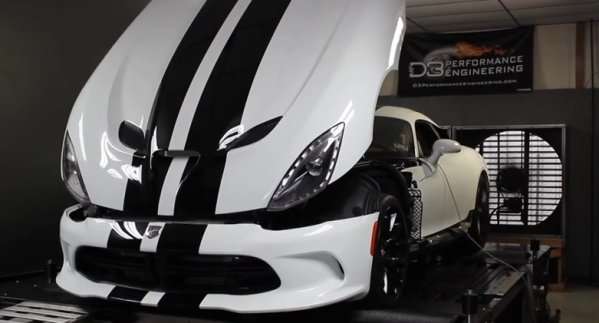 The Dodge Viper has always been a tuner’s dream thanks to the incredible potential of the V10 engine and today, we bring you a look at a newer Viper fitted with a twin turbo setup and tuned by D3 Performance Engineering – a setup which makes an awesome 950 horsepower with an otherwise stock engine.
Advertisement

The newest Dodge Viper packs a naturally aspirated 8.4L V10 engine that produces 645 horsepower and 600lb-ft of torque, which is enough thrust for this lightweight supercar to beat just about any stock car in the world. However, for those Viper owners who need a little extra oomph to beat those pesky high end Lamborghinis, forced induction is often the best way to go to make big power. This video arrived on YouTube yesterday, showing a newer Viper with a twin turbo setup on a stock motor in action on the dyno and the results are stunning – with 950.1 wheel horsepower and 959.2lb-ft of torque at the wheels.

A Stock Motor Beast
There are a great many tuner-built performance cars running around American roads with performance numbers that are creeping up on the 1,000hp mark, but the vast majority of them have full engine builds that leave behind very few of the original moving parts. On the other hand, the Dodge Viper tuned by D3 Performance Engineering of Houston, Texas shown in the video below has a fully stock engine fitted up with a twin turbocharger setup. Helping to feed this hungry V10 is an upgraded fuel system using E85, but all other components of the engine are factory stock – including the heads, cam, intake and the rotating assembly. Finally, to make the most of the D3 Performance Engineering tune, a standalone engine management system has been installed to prevent the shop from dealing with any of the limits of the stock engine management system.

The result is a modern Dodge Viper that produces 950.1 horsepower and 959.2lb-ft of torque at the wheels. Keep in mind that the stock rating of 640 horsepower (645hp in 2015 models) is the power level at the transmission – not at the wheels. Assuming a very conservative drivetrain loss ratio of just 12%, the D3 tuned Viper is making somewhere in the area of 1,064 horsepower at the crank. In other words, adding twin turbos, a bigger fuel system and a good tune to the new Viper has added at least 400bhp.

One Quick, Hard Pull
This dyno video is very short, but it shows all that we need to see to realize just how wicked this new Dodge Viper is with the help of D3 Performance Engineering. They make one hard pull – during which time we get to enjoy the auditory splendor of the roaring twin turbo V10 – followed by a look at the dyno sheet. At the bottom right is the important part, showing the aforementioned wheel power figures that indicate that this Viper’s V10 engine is definitely making at least 1,000 horsepower and 1,000lb-ft of torque.

Crank up your speakers and fall in love with this boosted Viper.

Toyota's First EV Will Have a Name of BZ: Toyota BZ
First Videos From Inside The Boring Company's Las Vegas Loop
END_OF_DOCUMENT_TOKEN_TO_BE_REPLACED