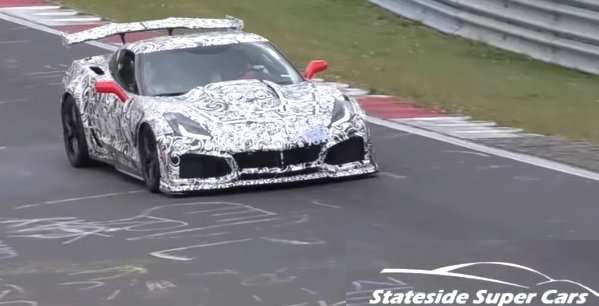 Watch the Next Chevrolet Corvette ZR1 Race around the Nürburgring

New video has surfaced showing what we believe to be the C7 Chevrolet Corvette ZR1 blasting around the Nürburgring with very little camouflage – giving us a great look at the huge air inlets on the newest Chevy supercar.
Advertisement

We don’t know what it will be called, but we have known for quite some time that General Motors is working on a more extreme version of the Chevrolet Corvette than the Z06 that is on sale today. We know that it will have a huge wing out back and we have expected that it would have significantly larger air inlets in the front fascia, but the video showing what we expect to be the new ZR1 testing at the Nürburgring offers the best look at the revised front end.

C7 ZR1 at the Nürburgring
In the video below, posted on the State Side Supercars YouTube channel, there is footage of a C7 Chevrolet Corvette blasting around the Nürburgring. It has the swirly vinyl camo, but the vents up front are completely exposed and they are significantly larger than the openings on the front of the C7 Z06. This car also appears to have a more prominent bulge in the middle of the hood, with a shape that seems to resemble the design of the C6 ZR1 hood – although this hood appears to sit much higher than the previous ZR1.

But back to that front fascia. The C7 Z06 has been haunted with discussions about stock cars going into a low-power mode when they have been run hard for a few laps. GM points out that a simple aftermarket tune can remove that low-power mode, but that also voids the warranty. Rumors have claimed that GM was working on a new front fascia which would allow for far more cooling flow, and this video seems to confirm those rumors while also giving us the best look thus far at the new design. It is dramatically different, looking more like an endurance racer than a Z06 – but there is no question that this front end should let plenty of air into the engine bay.

Listen to the ZR1 Whine and Roar
In addition to giving us our best chance to see the revised hood and front fascia of what we believe is the C7 Corvette ZR1, this Nürburgring video has great sound quality. In this video, we can clearly hear the whine of a supercharger as the Corvette test car approaches and when it drives away, the exhaust note is incredible – and incredibly loud. In fact, according to the person who posted the video, those odd exhaust tips are required of any car that produces more than 100 decibels of exhaust sound. Even with these added “silencers”, this blown Corvette sounds incredible as it races off into the distance.

So, without further delay, crank up your speakers and watch what is likely the next Chevrolet Corvette ZR1 blasting around the world’s most famous road course.