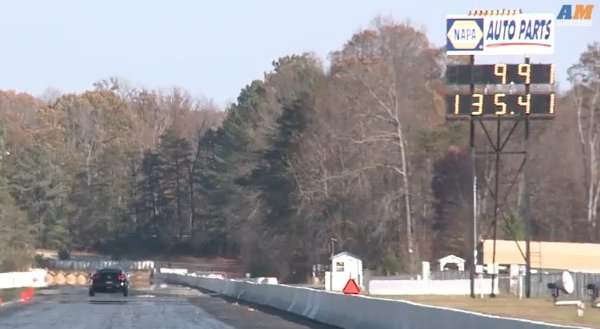 Roughly six weeks after we saw the first real world videos of the 2015 Ford Mustang GT on a drag strip, we have our first video of a next generation Mustang cracking into the 9 second range – with a surprisingly short mod list.
Advertisement

While the 2015 Ford Mustang GT is built to be the best handling “standard” Mustang of all time, drag racing is and always will be a big part of the Ford Racing DNA. Go to any local drag strip in America and you are guaranteed to see an array of Ford Mustangs from the past 50 years dominating the various classes so even though the 2015 Mustang is engineered to offer great road gripping abilities, it is still very important that this new muscle car can lay down some appropriate quarter mile times.

The stock 2015 Ford Mustang GT packs 435 horsepower which, when well driven, is enough power to put the S550 Mustang well into the 12 second range. With performance numbers like that, the 2015 GT will comfortably beat the vast majority of cars on the street, but those owners who spend lots of time at the drag strip may need to be a little quicker and for those people, Pennsylvania-based Mustang performance supplier American Muscle has the answer.

The American Muscle/Bama Tunes 2015 Mustang GT
There are a great many Mustang performance shops around the country working with the 2015 Ford Mustang GT and in many cases, those cars are being built to be drag strip monsters. There could be other privately owned Mustang GTs (not Ford Racing test cars) that have gotten into the 9s, but I have not seen any evidence of that and until I do, I believe that the black Mustang shown in the video below is the first to hit a 9 second quarter mile time in the care of someone other than Ford.

Being the first 2015 Ford Mustang GT in the 9s is impressive, but what is even more impressive is how little work was done to this car to get it into the 9s. Power-adding modifications include a cold air intake, a Boss 302 intake manifold, a fuel system upgrade (pump, injectors), header-back exhaust, a Nitrous Express 150 shot plate system and a Bama Performance track tune. No big engine build, no monster twin turbo setup – just exhaust, intake, nitrous and a tune.

Of course, being able to make use of that power is a big part of putting the 2015 Ford Mustang GT into the 9s, so American Racing has added Cobra Jet Springs, Cobra Jet Shocks, custom struts, Drive Shaft Shop 1,400hp half shafts, a carbon fiber driveshaft and big Hoosier drag slicks around Weld Racing wheels. Finally, to get the weight down, this Mustang GT has a lightweight front bumper support, skinny front tires/rims and both the rear and passenger seats have been removed.

IRS Looks Strong on the Drag Strip
The 2015 Ford Mustang is the first to feature independent rear suspension (IRS) across the entire model lineup and while this setup will improve ride quality and road handling, IRS is generally less appealing to drag racers. For instance, the 2003-2004 SVT Cobra had monster power, but the IRS made it hard to launch to its fullest potential. The concern with the 2015 Mustang was that the IRS would kill the car’s ability to dominate the drag strip, but this American Muscle video seems to put that to rest.

While there is some suspension work done to this 2015 Mustang GT, the were still running the stock IRS setup (no brace, no axle swap), yet they were still able to get into the 9s. When combined with the simple fact that stock quarter mile times are in the mid to high 12 second range, it looks like Ford has done a great job of tuning the chassis to offer great handling and great launching capabilities.

The video below from American Muscle includes the first 9 second 2015 Mustang GT quarter mile run and if you don’t want to listen to the discussion leading up to the run, skip ahead to the 2 minute mark.