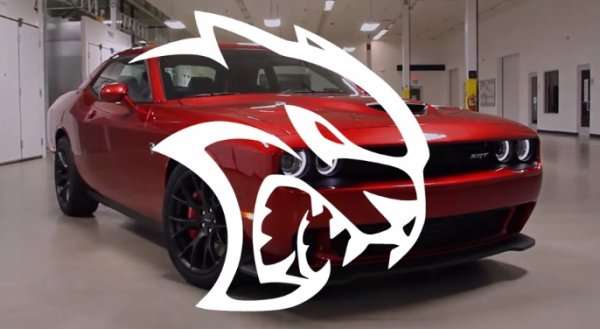 The very first 2015 Dodge Challenger SRT Hellcat built for public sale was auctioned off for charity and as the Chrysler Group was building that deep metallic red muscle car, they filmed the process and made a cool video showing the most powerful muscle car ever come to life in a minute and thirty five seconds.
Advertisement

While every example of the 707 horsepower Dodge Challenger SRT Hellcat is special since they are the most powerful American production cars of all time, the Chrysler Group shotcallers wanted the very first unit built for production to be special. Unlike the rest of the models that will be sold through the dealership network, Hellcat Challenger VIN #0001 was auctioned off for charity with help from the folks at Barrett Jackson. To make Challenger #1 that much more unique, it was painted a stunning Stryker Red exterior tone that is only available on the Dodge Viper and after the first car was completed, no other Hellcat Challengers will be painted that color.

NASCAR team owner and legendary car collection Rick Hendrick paid $825,000 for the right to own 2015 Dodge Challenger SRT Hellcat #1 while an organization that had vowed to match the highest bid helped to raise the total contribution to $1.65 million dollars. That made the first Hellcat Challenger the richest charity car ever sold through Barrett Jackson Auto Auctions.

Since this car was so very special, the Chrysler Group filmed the entire build process for the first 2015 Challenger SRT Hellcat and they condensed the process into a video that will take up just 1 minute and 35 seconds of your day.

Hellcat Challenger #1 Build Video
The video walking us through the production of the very first 2015 Dodge Challenger SRT Hellcat starts off by showing the bare chassis, which has been clearly marked as the underpinnings for the first 707hp Challenger. Although it trudges along the assembly line with the rest of the 2015 Challengers, we can see that the components being added along with the are all marked with #1 Hellcat and within the first 30 seconds, the car has become very recognizable as one of the world’s most powerful cars. We then see the body go through primer and paint – although it started off gloss black.

Next, we see the Hellcat Hemi – the 6.2L supercharged engine that makes the 2015 Dodge Challenger SRT Hellcat so special. Each Hellcat Hemi is run on the dyno as both a quality control procedure and to help break it in before the owner gets his or her new muscle car. The engine is then packed into the car, followed by the interior and the wheels before being driven off of the assembly line. The first Hellcat Challenger then pauses for a beauty shot in gloss black and Im thinking “but Hellcat Challenger #1 is Stryker Red – what gives?”

Well, about a minute into the video, we see the paint team mixing the ruby red paint and prepping the first example of the most powerful American muscle car ever – follow by two guys in suits hand painting the million dollar auction car.

The video ends with 2015 Dodge Challenger SRT Hellcat #1 starting, as the Motley Crue playing in the background pauses so that we can hear the sweet sound of the mighty Hellcat Hemi. Crank up your speakers and enjoy!