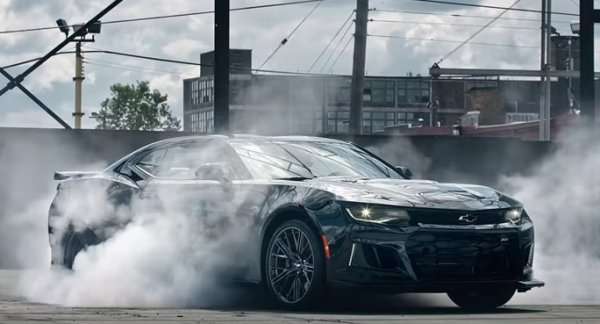 The 4th video has been unlocked on the Chevrolet Camaro 50th anniversary website and unlike the first three videos which featured all of the older generations, this new video focuses exclusively on the new Camaro ZL1 – with great soundbites of the LT4 engine revving and a huge, smokey burnout.
Advertisement

Over the past month, General Motors has been posting historic Chevrolet Camaro videos on the special website which was created to help celebrate the Camaro’s 50th anniversary. In addition to information on the three-day long festival of Camaro events on the weekend of the Woodward Dream Cruise, the Camaro 50th anniversary site has an area with a collection of locked and unlocked videos. A new video has been unlocked every other week or so over the past two months and with each of those “new” videos, we have gotten a look at a different aspect of Camaro history.

Today, the 4th video was unlocked and this time, there is no history lesson involved with this Chevrolet Camaro video. Instead, the newest section– titled “The roar of a new generation” – focused strictly on the 2017 Chevrolet Camaro ZL1.

Another Day at the Office
While the newly unlocked section on the Camaro 50th anniversary website is named “The roar of a new generation”, the featured video is titled “Another day at the office”. This video begins by showing a set of dual exhaust tips as the engine is being revved over and over. After a couple of seconds, the camera angle jumps to a panning shot of the car, at which point we see that it is the 2017 Camaro ZL1. The driver continues to rev the LT4 engine as the camera floats around the car for about 10-12 seconds, but after the camera pauses off in the distance for a second – the Camaro ZL1 begins to do an immense burnout with the help of the factory line lock system.

The burnout footage begins with a close up view of the Camaro ZL1 right rear tire, but it quickly pans away to show the car as it is surrounded in a lake of smoke – with the sweet soundtrack of the supercharged LT4 V8.

This new Camaro 50th anniversary video only shows the newest and most powerful Chevy muscle car of all time, rather than showing cars from the past 50 years, but this might just be the coolest video of the new Camaro ZL1 thus far.

Crank up your speakers and enjoy the roar of the 2017 Camaro ZL1 and stay tuned for more news on the Camaro 50th anniversary celebration.