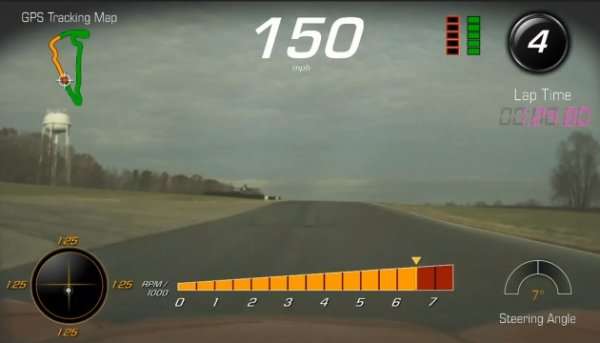 General Motors has rolled out a video showing the 2015 Chevrolet Corvette Z06 blasting around Virginia International Raceway that was recorded using the awesome Performance Data Recorder system and the result is 3 minutes of your day well spent.
Advertisement

The 2015 Chevrolet Corvette Z06 is billed by General Motors as the most track capable Corvette of all time and those drivers who want the ultimate track experience will surely love the new Performance Data Recorder. This system has a microphone in the cabin, a front-facing camera mounted in the rear view mirror, a memory card in the glove box to store everything recorded and this will all play through the infotainment screen mounted in the dash. Best of all, the Performance Data Recorder system has a spread of information overlays including everything from a track map, vehicle speed, engine RPM, throttle input, brake input, G Force, lap times and more.

This video from General Motors is a stunning example of how well the Performance Data Recorder works – and how well the 2015 Chevrolet Corvette Z06 will handle a well-known track like Virginia International Raceway when in the hands of a good driver. At the wheel is GM engineer Jim Mero, the same man who has laid down some of the quickest laps at tracks all over the world with the previous Corvette ZR1. It can be argued that there is no one who knows the modern Corvette like Mero, so few people can wield the Z06 like he can.

Z06 Lapping VIR
This video shows a 2015 Chevrolet Corvette Z06 piloted by Jim Mero as it rockets around the Grand West Course portion of Virginia International Raceway. Thanks to the Performance Data Recorder, we get to ride along, hearing everything and seeing everything that goes on during the run, while using the information overlays to see the various vehicle parameters including speed – while also keeping a look on the track time on the upper right, just below the gear indicator circle.

Throughout the video, we see how smoothly Mero pushes the Corvette Z06 around VIR as the car seems to effortlessly slip through the turns and reach awesome speeds on the straights before easily slowing down quickly enough to handle the next set of sharp turns. Those who are involved in road racing will enjoy watching this for the technical content while those who just love watching fast cars go fast will love this video simply because it goes very, very fast. Top speeds look to reach around 151 on at least three different points on the track and in the end, Mero turned a lap time of 2:41.3.

Compare that to Mero’s VIR lap time of 2:45.6 in the C6 Corvette ZR1 and you can clearly see how much better the 2015 Corvette Z06 is than the incredible C6 ZR1. Unfortunately, I’ve not been able to find a full list of lap time records on that particular circuit at VIR, but I do know that this is the same course that Car and Driver uses for their Lightning Lap. This year’s quickest car in the C&D Lightning Lap was the Porsche 918 hypercar, which “only” ran a 2:43.1. It should be kept in mind that Mero is a wizard with the Corvette so his lap times might be hard to replicate, but that comparison shows just how track ready the new Z06 really is.