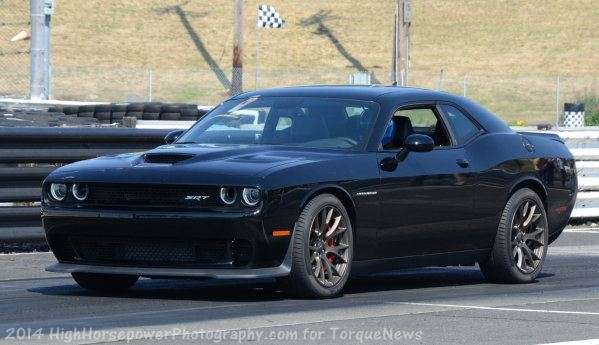 The Wait is Over: Dodge Challenger Hellcat Shipping to Dealers Now

The 2015 Dodge Challenger SRT Hellcat is the most powerful muscle car of all time and after months of eager anticipation, the first examples of the 707 horsepower Challenger have begun shipping to dealerships around the country so it shouldn’t be long before Hellcats start popping on a road near you.
Advertisement

The Chrysler Group made a big splash in the American performance car world when they announced earlier this year that their new 2015 Dodge Challenger SRT Hellcat would feature a supercharged Hemi with “at least 600 horsepower”. That promise of more than 600 horsepower created a ton of discussion as to how far above 600 it would be and when the company announced the actual power output of 707 horsepower – the performance world stopped and took careful notice. Not only is the Hellcat Challenger the most powerful muscle car ever, but it is also the most powerful American production car ever and the 6th most powerful production car in the world today.

In other words, the 2015 Dodge Challenger SRT Hellcat is a serious performance car and a beast like this created a high level of demand right away. That demand exploded when it was announced that the 707hp Challenger carried an MSRP starting below $60,000. When that price was announced, prospective buyers began lining up to buy the most powerful muscle car ever before beginning the long, painful waiting period. That wait is almost over – as the Chrysler Group has begun shipping the Hellcat Challenger to dealerships all over the United States.

Celebrating the Hellcat Challenger Delivery
The 2015 Dodge Challenger SRT Hellcat is a very special car and since it was first introduced this summer, there has been a tremendous amount of publicity created by the Chrysler Group. Really, nothing about this car is average and none of the presentations by the automaker about this car have been average so it should come as no surprise that the announcement of Hellcat Challenger deliveries beginning as far from average.

Some automakers will issue a press release about deliveries beginning for a special car, but more often than not, the start of deliveries comes without any mention from the company at all. No fuss was made when the first 2015 Dodge Challenger non-Hellcat models began shipping, nor was there any mention from Ford Motor Company when the first 2015 Mustangs were sent to dealerships around the country. Most people learned that Mustangs were being shipped when the first 53 cars sold were recalled. However, the Hellcat Challenger is special, so not only did the Chrysler Group announce the launch of the delivery process – they made a video celebrating the arrival of the most powerful muscle car ever.

This video shows rows and rows of Hellcat Challengers at the Brampton Assembly Plant along with footage of the 707hp muscle cars being pulled onto the trucks. Of course, there is plenty of saucy sounds from the Hellcat Challenger with dramatic music provided by Motley Crue.

Above all, this video confirms that the first batch of 2015 Dodge Challenger SRT Hellcat super muscle cars have left the plant for dealerships around the country, so it is only a matter of time before we begin seeing them on the street and at race tracks around the country.