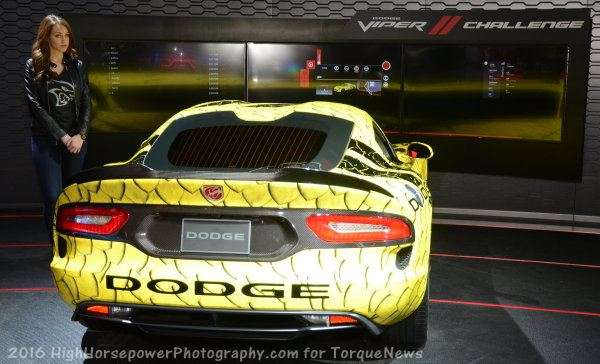 Virtually Drive the Viper, Ford GT and Shelby GT350 at the NAIAS

Those folks who attend the Detroit Auto Show over the next week and a half will have a chance to virtually drive the Dodge Viper, the Ford GT supercar, the Shelby GT350 Mustang and a host of other vehicles – some of which actually allow spectators to sit in the actual vehicle while using the driving simulator.
Advertisement

Events like the North American International Auto Show in Detroit are a great way for the masses to see the latest and greatest vehicles sold in the United States, but seeing the new cars, trucks and SUVs sitting under the lights doesn’t give show-goers a chance to see these vehicles in action. Thanks to advancements in video game technology, driving simulators have gotten so realistic that automakers are now able to give spectators a chance to experience some of these vehicles in ideal virtual settings, and both Ford and Chrysler are capitalizing on this technology at this year’s Detroit show.

Drive the Dodge Viper GT
First up, the Chrysler Group is once again using this technology, but rather than the Dodge Charger that you could “drive” at the 2015 show, the 2016 show allows attendees to experience the Dodge Viper GT. As was the case with the Charger last year, you actually sit in the car facing several large screens and you use the steering wheel and the pedals of the actual Viper to control the virtual car on the screen. As you drive, the car leans side to side with the turns and vibrates when you run off of the road and crash – which was pretty common when I was watching people give it a try.

For many people, this is as close as they will ever get to sitting in a Dodge Viper, let alone driving one, so this is sure to be a very popular attraction every day of the Detroit Show.

Drive All Sorts of Ford Products
Ford Motor Company has also used virtual driving simulators in the past, but for the 2016 show, they really went crazy. In the large, upgrades area of the Ford display, there is a collection of driving consoles (racing seat, pedals, steering wheel, screen) running Forza Motorsport 6. These high tech gaming consoles allow you to drive the Ford GT supercar, the Ford Shelby GT350 Mustang and the Ford Focus ST on a group of real world race tracks in what is arguably the best driving simulator on the market today. If high performance and racing isn’t your cup of tea, you can head back downstairs to the main floor of the Ford display, where you can climb into the new Ford F150 or the Ford Explorer for in-vehicle virtual drives. The F150 allows spectators to virtually experience the new trailer back-up assist system while the Explorer lets people drive the popular SUV in a variety of different settings.

Oh, and when you drive the F150 or the Explorer virtually, you are raised high above the floor. I don’t know that anything catches the eye like a Ford Explorer “driving” 10 feet above the auto show floor. So if you are headed to the Detroit Auto Show over the next two weeks, be sure to stop into the Dodge and Ford displays to drive some of the hottest cars in the US and to experience some of the newest technology from Ford Motor Company.