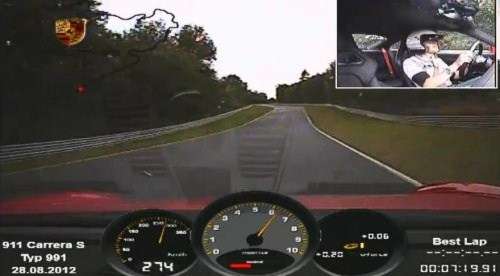 A video has hit the internet showing the 2013 Porsche 911 Carrera S tearing around the famed Nürburgring race course with a time of 7:39.9, putting the new Carrera S in very impressive company in terms of recorded lap times and in fine modern Nürburgring lap times – the German automaker has offered up an awesome video of the lap time being set.
Advertisement

The Nürburgring Nordschleife has become the ultimate proving grounds for every type of sports car from automakers around the world so when the 2013 Porsche 911 Carrera S turned out a lap time of 7:37.9, the new 911 Carrera S put itself among some incredible company. That time makes the 911 Carrera S faster than times turned in by the Lexus LFA, the 2009 Chevrolet Corvette ZR1, the Nissan GT-R and the Ferrari 458 Italia – all of which ran a time of 7:38 in the hands of European car mag Sport Auto driver Horst von Saurma.

The 2013 Porsche 911 Carrera S used for the video below was equipped with the dual clutch automatic transmission featuring paddle shifters that the German automaker calls the Porsche Doppelkupplung (PDK). The wheelman in the video below is pro racer Timo Kluck. Perhaps what makes this new ‘Ring lap time so impressive is the fact that the Carrera S is really just a small step up from the base 2013 911. This 400hp, rear wheel drive coupe carries a price tag below $100k which makes it less expensive than plethora of cars on the Nürburgring Nordschleife lap time list that turned in slower times.

Seeing how quickly Kluck got the new 2013 Carrera S around the famed German race course not only gives this model some serious high performance street cred but it also shows the promise of the new 911 Turbo S when it hits the ‘Ring. Among other things, the Turbo S adds 130 horsepower and all wheel drive which allows the Turbo S to dash from 0-60 a full second faster than the Carrera S along with packing a stock top speed of 195 miles per hour (8 better than the Carrera S). Should those differences between the Carrera S and Turbo S be enough to shave ten seconds off of the time shown in the video below, the 2013 Porsche 911 will officially be faster than the Porsche Carrera GT supercar.

While I suspect that there are some of you out there who simply don’t understand why it makes any difference what a sports car runs at a massive German race course and if you are one of those people – there is a good chance that you will never own (or what to own) a 2013 Porsche 911 Carrera S (or any car like it). However, the global sports car segment is all about bragging rights – showing that your car is better at something than the competition. Some automakers go for the bragging rights of having the most horsepower or the highest top speed but the Nürburgring has become the standardized test for high performance cars. Even though most supercar drivers never push their car anywhere near the levels of performance needed to turn out a lap time like this, the ‘Ring combines incredible high speed stretches and 73 turns that put the suspension and braking systems to the ultimate test. There is arguably no course in the world today that can offer such a elaborate test of a sports car and that is why turning in a good Nürburgring lap has become such a big deal. Even if the prospective Porsche buyer will never step foot on race track property, someone paying up around 6 figures for their new sports car appreciates knowing just how fast he could be.

Another aspect of the Nürburgring that has become almost as important as the lap time itself as an elaborate video showing the record lap being turned – and in the case of the 7:37.9 lap run by the 2013 Porsche 911 Carrera S, the video is among the best we have seen. Porsche has included a small map in the upper left corner to show you exactly where the car is on the track during the lap along with a vehicle telemetry that includes an analog and digital speedometer, a tachometer with both brake and throttle force and an accelerometer that shows that force applied to the vehicle while tearing around the track. This video also offers great in-car audio including the engine roaring and the tires screaming to hold on as the 911 Carrera S rips around the track. You might notice that although the top speed of the 2013 Carrera S is 187 miles per hour, the car in the video only hits a best of 274kmh – which is about 170 miles per hour.

So, kick back, crank up your speakers and enjoy the video of the 2013 Porsche 911 Carrera S setting a best lap time of 7:37.9 at the Nürburgring Nordschleife.