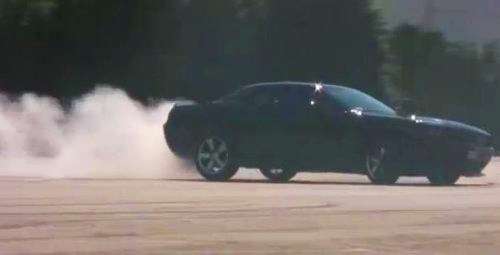 Ventriloquist Jeff Dunham working on a SEMA project with Mopar

Comedian and ventriloquist Jeff Dunham is currently working on a project with the folks from Chrysler’s Mopar division to customize a 2012 Dodge Challenger SRT8 with a series of YouTube videos chronicling the build – and the debut of this unique Challenger named Project Ultraviolet is set for the 2012 SEMA Show in Las Vegas.
Advertisement

Evidently, Jeff Dunham is a big fan of high performance Chrysler products so when the folks from Mopar wanted a celebrity to team up with on a 2012 SEMA Show project – they turned to Dunham for his input. Chrysler has worked with celebs in the past like country star Kenny Wayne Sheppard to design gorgeous customized and privately owned muscle cars for the SEMA Show but unlike Sheppard’s custom 1964 Dodge A330, Dunham’s project is based on a brand new model.

As you can see in the video below which is the first in a series of YouTube clips featuring Jeff Dunham, the Mopar team and Alan Palmer (his custom shop is responsible for the Project Ultraviolet build), Dunham met at his home with Chrysler regional communication boss Scott Brown and Head of SRT/Mopar Mark Trostle to discuss the project. Trostle presented Dunham with a variety of computer generated images of customized 2012 Dodge Challengers while the comedian pointed out what he did and did not want in Project Ultraviolet. The key points were that he wanted it to be a new Challenger SRT8 with the 470 horsepower, 392 cubic inch Hemi mated to a proper 6-speed manual transmission. Dunham also talked about some of the features that he did like and didn’t like, specifically showing favor towards the muscular wheel flares and a vintage T/A-style hood.

From there, the video takes us to Motor Village Los Angeles where Jeff Dunham picks up – you guessed it – a 2012 Dodge Challenger SRT8 with a 6-speed manual transmission. Dunham jokes that the placard attached to the sun visor explains that the car shouldn’t be run hard until 500 miles has been racked up but after just 14 miles, Dunham hands the new SRT8 a good, hard flogging in an open parking lot - hoonage style (as seen in the still on the right). I’m guessing that he isn’t too worried about the warranty.

After that, the first video in the Jeff Dunham Project Ultraviolet series shows us a bunch of quick glimpses of Dunham and the Palmer’s Customs team hard at work, building the SEMA Show-ready modern Mopar muscle car. It is unclear just how many videos Dunham’s YouTube channel plans to post to tease Project Ultraviolet but with just 12 days until the Las Vegas Convention Center opens its doors for SEMA 2012 – time is of the essence.

While it seems interesting that Dunham’s Project Ultraviolet is black, the video opens with a short monologue featuring Dunham and a 1970 Plymouth Cuda so there is likely to be some tie-in between the customized Challenger and that Plum Crazy Cuda. It should also be pointed out that rumors suggest that the Chrysler SRT brand is currently working on a new model based on the Challenger that will be named the SRT Cuda…but that could very well be coincidence.

In any case, Jeff Dunham’s customized 2012 Dodge Challenger SRT8 will surely be one of the big attractions in the sprawling Mopar display at the 2012 SEMA Show. TorqueNews will be covering the SEMA Show live but as we near the big event – we will continue to bring you all of your pre-SEMA teaser news!