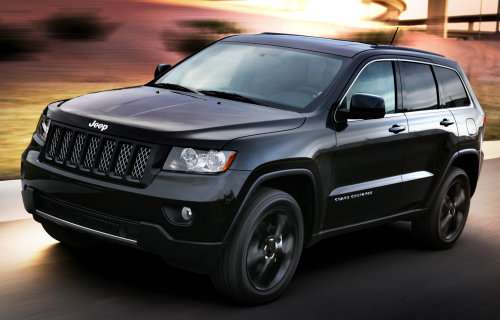 An evaluation process by the German magazine Auto, Motor und Sport has found that the 2012 Jeep Grand Cherokee poses no threat of rollover during a sudden evasive maneuver known as the “moose test” or “elk test” – putting to rest the claims by a smaller Swedish publication claiming that the Grand Cherokee’s safety features did not work properly.
Advertisement

Earlier this month we brought you the news that the small Swedish magazine Teknikens Värld had publically asked that the Chrysler Group stop selling the popular Jeep Grand Cherokee after the vehicle reportedly came close to rolling over during a sudden lane change test (click here for a look at the original article discussing the rollover concern).

Chrysler was quick to deny that there was any problem and worked with Teknikens Värld with properly loaded Jeep Grand Cherokee SUVs to prove that there was no increased risk of rollover or a wheel-lift condition. The company’s testing procedures have now been backed up by the German magazine Auto, Motor und Sport (AMS) – who conducted the moose test on their own with the 2012 Jeep Grand Cherokee – confirmed that there is no risk of rollover during a sudden, evasive driving maneuver.

The Chrysler Group issued a statement announcing the Auto, Motor und Sport findings, which highlighted the fact that whether the Jeep was loaded to the capacity or relatively empty – there was no instance of a tire leaving the road during the moose test. Auto, Motor und Sport goes on the point out that they had initially tested the 2012 Grand Cherokee with no problems earlier this year but when the Swedish publication claimed that there was a problem with the function of the Jeep’s stability control that was worthy of asking that the vehicle no longer be sold in Sweden, Auto, Motor und Sport opted to conduct the test once again. AMS repeated the tests performed by Teknikens Värld while fully loaded with the maximum number of passengers – releasing the accelerator to cause the vehicle to shift while swerving hard – and at no point did any of the tires lose contact with the ground. AMS also points out that while performing this test, the Grand Cherokee was properly loaded and the course was set up within the guidelines of the German Automotive Manufacturer Association.

The statement from Auto, Motor und Sport (repeated in a Chrysler Group press release) ended with the simple statement that echoes the claims by the automaker that the vehicle tested in Sweden had been overloaded at the time of testing. “Whether loaded with 2 people on board or with the maximum permissible total weight, all four wheels maintained contact with the ground to the greatest possible extent,” said the piece in Auto, Motor und Sport. “The tested Jeep did not demonstrate one-sided uplift or, let alone, tipping. This confirms the theory that the Cherokee in Sweden was overloaded.”

Chrysler emphasizes that the 2012 Jeep Grand Cherokee is one of the safest vehicles on the road today, having been named a “Top Safety Pick” by the U.S. Insurance Institute for Highway Safety. The Jeep Grand Cherokee also meets or exceeds all safety requirements in all of the markets in which it is sold – including Sweden, Germany and the United States.