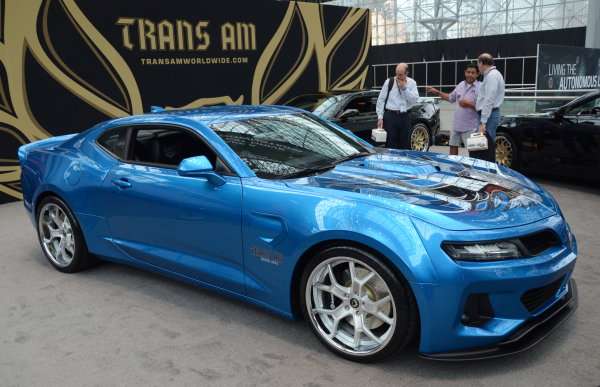 The Trans Am 455 Super Duty is a Remarkable Camaro Remake

It has been many moons since a new Trans Am was offered by General Motors at the New York Auto Show, but the team at Trans Am Depot has rolled out their new 455 Super Duty at the ongoing Big Apple show.

If you are a fan of high performance GM vehicles, Chevrolet has a nice spread of Camaro and Corvette models, including the 2018 Camaro ZL1 1LE in all its aggressive glory, but as an extra bonus, the crew at Trans Am Depot brought out three examples of their Camaros-turned-Firebirds – including the new 455 Super Duty package. Like the previous Trans Am Depot conversions, the new Trans Am 455 Super Duty has a uniquely-Firebird exterior design, but that isn’t the most exciting aspect of the car.

Next, the hood has been replaced with a rear-facing “shaker” design, similar to the 73-74 models and following the mid-70s vibe – the 2017 Trans Am 455 Super Duty has air extractors high on the front fenders. Also along the side, we can see the unique 20 inch wheels with gigantic Brembo brakes with 6 piston calipers over 380mm rotors up front and 4-piston calipers over 380mm rotors out back.

Just based on looks, the 2017 Trans Am 455 Super duty is an beautifully customized 6th generation Camaro and I believe that it is my favorite of the Trans Am Depot cars thus far – but the appearance isn’t the most exciting part of this package.

The 455 Super Duty Engine
Under the shaker-style hood of this 2017 Trans Am 455 Super Duty is a modern interpretation of the original 455 Super Duty V8, except this one is based on the current LT1 V8 from the Camaro SS and Corvette Stingray. The key difference is that Trans Am Depot enlarges the LT1 from 6.2 liters to 7.4 liters – or 455 cubic inches. This bored and stroked LT1 engine is topped by a Magnusson supercharger, which delivers enough boost to lift the engine output to an incredible 1,000 horsepower and 1,046lb-ft of torque.

That power is sent to the rear wheels by means of the 6-speed manual transmission or the 8-speed automatic, and with that automatic transmission, this modern “Firebird” should be a real beast out on the open road.

Finally, in addition to the monster engine, the big Brembo braking system, the sport suspension package and the elaborate exterior facelift, the 2017 Trans Am 455 Super Duty has an interior with the old school Firebird logo from the mid-1970s embroidered on the seatbacks.

Unfortunately, there is no price available for the Trans Am Depot 455 Super Duty, but I imagine that acquiring one of the 50 examples planned for production will not come cheap. However, for those who can afford what will likely be a large price tag, this is one impressive customized 2017 Camaro.