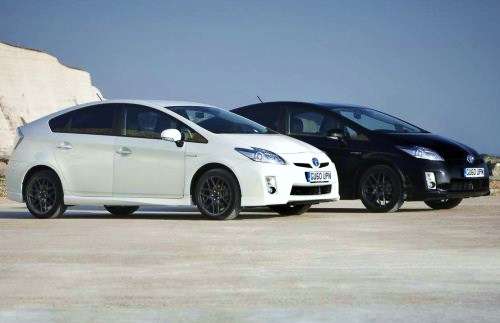 While some may look at all hybrids as being of interest to just a small niche market, the Toyota Prius has officially become the 3rd bestselling nameplate in the world - trailing only the Toyota Corolla and the Ford Focus in terms of total global sales.
Advertisement

Through the first quarter (January, February, March) of 2012, the Toyota Prius nameplate has moved 247,230 units in the various markets around the world. This makes the Prius the 3rd bestselling vehicle in the world behind only the Toyota Corolla (300,800 sold) and the Ford Focus (277,000).
It should be noted that unlike the Toyota Corolla, the Ford Focus and many other of the top nameplates in the global auto industry, the Toyota Prius is a “family” of vehicles and not a single model. That figure of 247,230 vehicles sold includes the original Toyota Prius hatchback, the Prius V, the Prius Plug-In and the company new Prius C (known as the Prius Aqua in other markets). While the Focus offers 2-door, 4-door and 5-door models around the world, the Prius family has a much broader offering of vehicle types for prospective hybrid buyers around the world and the sales results have made that very clear. Even with the “niche” group of buyers who are after hybrid and plug-in hybrid vehicles (which is obviously growing quite rapidly), the Prius has risen to a global sales level that few cars ever reach.

The biggest contributor to the Toyota Prius family’s success through the first few months of 2012 is the introduction of the compact Prius C (Aqua in Japan) around the world but especially in Japan. The Prius nameplate moved just 52,507 units in the first quarter of 2011 while they have sold 175,080 units during the same period in 2012. This number has also been aided by a government rebate of 100,000 yen ($1,258 USD) on qualified Prius vehicles combined with tax rebates that can effectively reduce the price in Japan by another 100,000+ Yen. These rebates on the top hybrid in the world have encouraged Japanese buyers to be far more responsive to the Prius family and while the government aided rebate is limited to 300 billion Yen so it can run out…those tax rebates are expected to continue through 2015 so Prius sales could remain very high over the next few years.

Toyota was the first automaker to introduce a reliable, affordable hybrid to the global market so it should come as no surprise that the Prius is the most popular hybrid in the world but the fact that the Prius has so quickly become one of the top three bestselling cars in the world surely comes as a surprise to those who question the hybrid movement.

There are a few variables working against the continued success of the juggernaut Toyota Prius hybrid family – mostly relating to new competition in the hybrid segment. The influx of truly competitive hybrid models from Ford Motor Company along with new technology found in the likes of the Nissan Leaf and Chevy Volt offer prospective Prius buyers new options in the segment. Luckily for the Prius, Toyota has continued to improve on their hybrid offerings as the competition has stepped up their games.