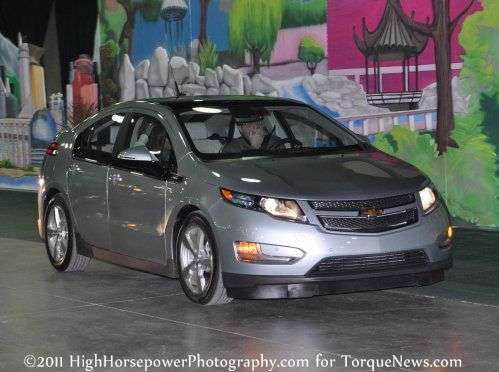 TorqueNews drives the Chevy Volt at the 2011 Detroit Auto Show

The key focus of the 2011 Detroit Auto Show is showing off new production and concept vehicles from around the American auto industry but the basement of Cobo Hall has spent the past few years as a low-speed driving course for the greenest (zero emission) vehicles in attendance and this year, the 2011 Chevy Volt was among the vehicles available for a test drive.
Advertisement

I am a performance car guy but in no way am I opposed to the idea of electric cars and over the past few months, I have been jonesing for a chance to drive Chevrolet’s award-winning Volt. Even though the driving area set up in the massive basement of the 2011 Detroit Auto Show is fairly small, allowing only low speeds, this gave me my first chance to drive one of these high tech electric cars and I was excited to experience the vehicle that could begin the next era of American motoring.

I climbed into a silver 2011 Chevy Volt with a representative from Chevrolet and after I put my seat belt on, I depressed the brake pedal and pushed the blue power button mounted to the left of the shifter on the center stack…and nothing really happened. I’ve become so accustomed to feeling and hearing a gasoline engine shake to life that when the only real response to the push of the power button was the dash/gauges lighting up, I wasn’t sure if the car was running. I pulled the shifter into drive half expecting the silent car not to move but as I hit the accelerator, the Volt eased away from the parking area.

The acceleration of the 2011 Volt was seamless and smooth, and should this car have he audible engine noise of a traditional car the average car-buyer wouldn’t be able to tell the difference between this and any other vehicle with similar power output. The 2011 Volt production models come with an alert sound that can be activated by the driver but the only sound I could hear while driving through the basement of the Detroit Auto Show was the scratch of the tires on the smooth concrete and a barely-audible low hum from the drive train. The small, square test track didn’t allow for high speeds but the wide track did allow for some side to side cuts and the Volt felt confident and fairly nimble at these low speeds. The short straights didn’t give me a chance to test any top speed capacities but it did give me a chance to test the acceleration (a bit) and there was plenty of get-up-and-go for the type of buyer who will go with the Volt. After all, many of the people buying a Volt are doing so for emission free driving and the extended range capabilities; not high performance but during my few laps in the 2011 Volt, I was happy with the driving dynamics of the eco-friendly sedan.

One problem that I had considered prior to driving the 2011 Volt (or any other all-electric car) is that the lack of drive train noise offers a ton of potential to expose other various rattles and creaks around the car. The Volt had none of those - from the interior to the suspension and while you would expect a car to be very “tight” when it was brand new, I was impressed by the lack of any unwanted noise inside of the car. Along with being nice and quiet, the Volt’s interior was comfortable and the cockpit-like driver’s area put everything within reach.

While I still intend to spend some time driving the 2011 Chevy Volt in the real world, my few laps around the 2011 Detroit Auto Show’s test track confirmed for me that this new extended range electric car does exactly what it needs to do - offering the driving dynamics, comfort and conveniences of your average modern sedan combined with emission-free electric driving. General Motors and the other companies offering electric vehicles have the challenge of making a car that runs on electric first (unlike hybrids like the Toyota Prius) without losing the driving appeal expected by the new car buyers around the US. It is a very unusual feeling driving a car that makes no sound but once you put that aside, the Volt felt like any other car on the road – without depending on foreign oil or adding more pollution to the atmosphere.

Check out the gallery below for a look at the 2011 Chevy Volt used for the Detroit Auto Show test drive, including a look at the gauges displayed during electric driving.

Toyota's First EV Will Have a Name of BZ: Toyota BZ
First Videos From Inside The Boring Company's Las Vegas Loop
END_OF_DOCUMENT_TOKEN_TO_BE_REPLACED