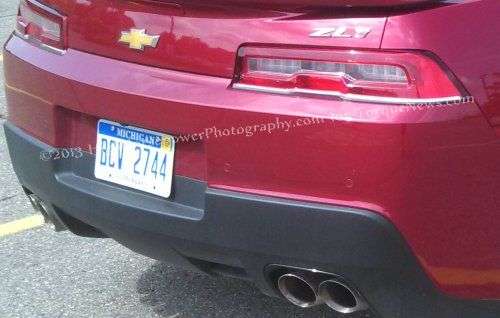 Thanks to the wonders of cell phones, we have a few images of a 2014 Chevrolet Camaro ZL1 Convertible test mule sitting in a parking lot fully exposed – giving us our first good look at the new super-Camaro droptop.
Advertisement

As you can see in the images here, this 2014 Chevrolet Camaro ZL1 Convertible wears the optional silver ZL1 wheels that were offered for the 2013 model year (although the standard black wheels look so awesome that I don’t know why anyone would opt for the silver rollers) along with the same hood and rear spoiler that were used on the current models. Where this model differs from the 2013 ZL1 Convertible is the new rear end design featuring the revised taillights and a lower diffuser area in contrasting black that extends much further up the body than the dark portion of the 2013 models. In addition to being larger, the rear diffuser portion has more of a “splitter” design than the outgoing models.

The most intriguing bit of information about the 2014 Chevrolet Camaro ZL1 Convertible shown here is that – like the ZL1 test mule coupes running around the Detroit area – the new droptop muscle car does not feature the new front end that will debut for the 2014 model year. When GM introduced the new exterior design for the 2014 Camaro, it centered around the revised rear end and a new front end that features a slimmer, more aggressive looking grille. As you can see in these images, the revised rear end that was introduced on the 2014 Camaro SS and new Camaro Z28 is present on this 2014 ZL1 Convertible test vehicle but the front end is identical to that seen on the current (2013) model year Camaro ZL1 Convertible. Considering that other sources have caught the 2014 Camaro ZL1 Coupe out and about with the unrevised front end, it doesn’t come as a huge shock that the 2014 ZL1 Convertible test vehicles also wear the old front end but we have to wonder why. As I see it, there are two possibilities for this.

1.The front end design of the current Camaro ZL1 is so perfect in terms of both aerodynamics and cooling that the company doesn’t see a need to change it. Perhaps the smaller grille opening that we saw on the 2014 Camaro SS and Camaro Z28 doesn’t allow enough air flow to keep the 580 horsepower supercharged V8 cool so they will stick with this design while the other 2014 Camaro models go with the new front end.

2.The 2014 Chevrolet Camaro ZL1 in both Convertible and Coupe form will feature a vastly redesigned and completely unique front fascia that the company wants to keep under wraps until the 2014 ZL1 models are formally introduced. The current ZL1 has a front end design that differs quite a bit from the standard Camaro SS so perhaps the revised 2014 ZL1 will also feature a front end that allows it to stand out from the rest of the new Camaro lineup. The company could be saving the debut of the new ZL1 front end for some other event, keeping something special up their sleeve to keep us all wondering and letting people get their fill of the awesome new Camaro Z28 before rolling out the new ZL1 in its entirety. It should be noted that while this 2014 Chevrolet Camaro ZL1 Convertible does not wear the traditional manufacturer’s license plate that we are so accustomed to seeing on test mules, the gentleman who was lucky enough to climb into the driver’s seat of this beast was wearing a General Motors badge and these pictures were taken about two miles from GM’s Milford Proving Grounds.

So, do you think that the 2014 Chevrolet Camaro ZL1 Convertible will wear the same front end as the 2013 model year vehicles or is GM saving the real front end for a big debut? Tell us your opinion in the comment section!