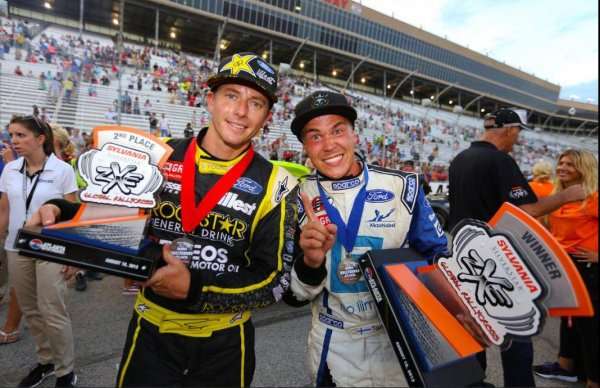 Toomas “Topi” Heikkinen continued his amazing 2013 Global RallyCross season this weekend in Atlanta – winning his 5th straight race and guaranteeing himself the 2013 GRC championship even though there are two races left on the season.
Advertisement

Topi Heikkinen started the Global RallyCross race at Atlanta Motor Speedway in the same form that he has finished the last four events – with total domination.  Topi ran in the first heat race of the event against Sverre Isachsen and Scott Speed and even with some serious contact between himself and Isachsen entering the first turn, Topi found himself with a massive lead after the first sequence of turns.  The first heat race was pretty much over before the drivers were anywhere close to completing lap #1 as Heikkinen guaranteed his stop in the final race.  After a bit of great racing with Isachsen (after he had been penalized for the first lap contact with Topi), Scott Speed was able to secure the second spot and send himself to the final race as well.

The second heat race of the day brought out four more drivers to battle for two guaranteed spot in the finals including Ken Block, Steve Arpin, Bucky Lasek and Timur Timerzyanov.  Ken Block got a great start and was quickly able to establish himself as the man to beat in this heat race with Arpin, Lasek and Timerzyanov falling in line behind.  As the field spread out, Block continued to pull away while Lasek and Arpin battled for the second spot until Bucky hit the wall twice in one lap with Timerzyanov falling quite a distance back in Travis Pastrana’s Dodge Dart.  Things remained pretty much the same through the checked flag with Arpin taking the second spot and sending both Lasek and Timerzyanov to the Last Chance Qualifier (LCQ). In the third heat race of the Atlanta Global RallyCross event, Brian Deegan, Tanner Foust, Dave Mirra and Henning Solberg faced off for the next two transfer spots to the finals.  Tanner Foust got off to a great start and even considering some contact with Brian Deegan through the first chicane, Tanner was able to grab the early lead.  Solberg took the second spot early on behind the wheel of Bryce Menzies’ Dart with Deegan in third and Mirra in fourth until the Dart dropped to fourth when those other two drivers took the optional short cut turn on the second lap.  After that, Solberg dropped out of contention as Mirra and Deegan battled for the second transfer spot to the finals over the next few laps but Mirra was never able to get his Subaru around Deegan’s Ford.

In the Last Chance Qualifier, three of the Bucky Lasek, Sverre Isachsen, Dave Mirra, Patrik Sandell, Timur Timerzyanov and Henning Solberg lined up to fight for the final three transfer spots to the finals.  On the start, Bucky Lasek ran into problems and didn’t move, essentially cutting the field down to five as the drivers entered the first turn.  Unfortunately for Patrik Sandell, who had blown a motor in practice and was unable to compete in the first heat race of the day, he was shoved off of the track and over a dirt mound that sent him skyward – with a landing that did significant damage to the car.  This cut the field down to just four cars before they had even gotten to the second turn and when Dave Mirra gave Henning Solberg a tap in the second turn and sent him into the wall, the field was cut to just three cars so all they had to do was cruise through the four lap race to go onto the finals but Sverre Isachsen and Dave Mirra had different plans.  After a fierce battle between the two Subarus that found Mirra in second place, Dave Mirra ran up into the right side of Timerzyanov’s Dart on the last lap – shoving the Dodge out of the way and allowing the blue and highlighter green Subaru to win the LCQ.  Timerzyanov and Isachsen also moved onto the finals to complete the nine car field. In the final race of the Atlanta Global RallyCross event, 8 drivers lined up with the hopes of stopping Topi Heikkinen from winning his fifth straight race.  Joining the young Finn in the finals was Ken Block, Tanner Foust, Brian Deegan, Scott Speed, Steve Arpin, Dave Mirra, Timur Timerzyanov and Sverre Isachsen.  As had been the case all day, the start and the first few turns helped to thin the field quite a bit.  Ken Block had a bad start and instantly fell to the back of the field while Steve Arpin’s hard crash into the outside barriers in turn 1 eliminated him from the race.  As the field exited the first set of dirt turns and hit the tarmac, Topi Heikkinen had a lead with Tanner Foust in second and Brian Deegan in third. Dave Mirra was fourth until Scott Speed spun him in the last turn of the first lap.  Isachsen would take fourth on the next lap when Speed was penalized for the contact with Mirra with Timur Timerzyanov in fifth.  The race up front continued with Topi out front, Tanner second and Deegan third until Deegan’s Ford ran into technical issues during the 6th lap – making it a two car race for the win between Foust and Heikkinen.  Foust would draw close in the final few laps, -pulling within roughly a second of Topi until he blew a left front tire on the ninth lap of the ten lap final race.  This allowed Toomas Heikkinen to easily drive to his fifth straight win and his seventh podium finish of the 2013 season.

Topi Heikkinen has been an unstoppable force this season, having won each of the last five races after finishing second in Brazil to open the season and third at the first of two races in Munich.  With his perfect record of 7 podium finishes in 7 races along with 5 straight wins, Heikkinen has put himself in a position where he cannot be caught in the battle for the 2013 Global RallyCross championship.  Even if Topi should sit out the final 2 races of the season in Charlotte and Las Vegas and 2nd place holder Tanner Foust should win both of those events with a heat race win in each – Tanner will not have enough points to overtake Topi for the championship. There is still a race for the second spot in the 2013 Global RallyCross championship race as with two races left, any of the drivers sitting in the third through ninth positions could mathematically earn enough points to catch Tanner Foust…although some of those drivers would need for Foust to not show up at Charlotte or Las Vegas to have a shot to catch last year’s champ.