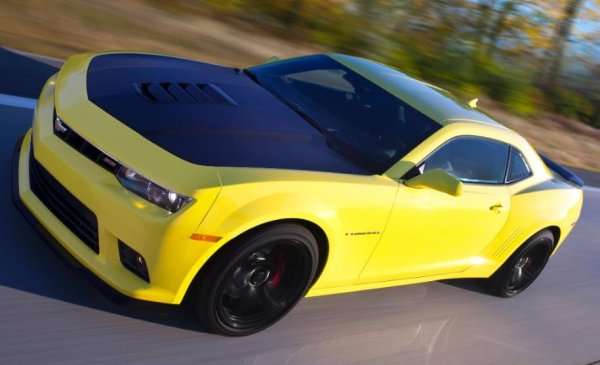 A while back we reported that there would likely not be a 2016 Chevrolet Camaro powered by a turbocharged 4-cylinder after Camaro boss Al Oppenheiser stated that there would not be a 4-cylinder Camaro any time soon – but new reports and insider information now leads us to believe that maybe GM does have a turbo 4 in the works for the 6th gen Camaro.
Advertisement

Back in November of 2013, Camaro Chief Engineer Al Oppenheiser was quoted as saying “As long as they’ll pay me to be the chief engineer, I’m going to fight for every horsepower I can and every cylinder I can,” suggesting that there would not be a turbocharged 4-cylinder engine under the hood of the 2016 Chevrolet Camaro. At that point, it seemed all but a sure thing that GM wouldn’t be cooking up a turbocharged 4-cylinder to power the 6th generation Camaro.

After that, rumors continued to float around the automotive world that General Motors was indeed a turbocharged 4-cylinder engine under development for the 2016 Camaro, but those rumors were never supported by the automaker…leaving only Oppenheiser’s comments as the only somewhat official work on the existence of this small and powerful yet efficient engine. Well, a new report has surfaced from the British site Autocar, claiming that there will indeed be a 2016 Camaro powered by a turbo 4 – although they don’t provide any sort of facts to support said claim.

New Chassis, New Engine?
While Al Oppenheiser’s comments back in November 2013 seemed to suggest that he wasn’t interested in offering a turbocharged 4-cylinder in the 2016 Chevrolet Camaro, I recently spoke with a member of the Camaro community who assured me that Oppenheiser’s comments were taken way out of context. It seems that when he said that he would fight for every cylinder and every horsepower, many people assumed that meant that we wouldn’t see a Camaro version of the 2015 Mustang EcoBoost. However, Oppenheiser never actually stated that there would not be one – only that he would fight for all of the power possible. That could have meant that he plans to see to it that the turbocharged 4-cylinder 6th gen Camaro is as powerful as possible and according to the folks at Autocar – that could be the case.

In a recent piece, Autocar talked about the upcoming 2016 Camaro, including the styling and the engine options. They stated that they expect to see a 2.0L turbocharged 4-cylinder that will produce 268 horsepower and 295lb-ft of torque. While they don’t cite a source of that information, it seems odd that they would state such specific figures…especially considering that those figures differ from the output of the same engine in the new Cadillac ATS. Coincidentally, the next generation Camaro will ride on a similar platform as the ATS (and CTS), so it would make sense that the cars would share similar engines. At the same time, with the turbocharged ATS packing 272hp and 205lb-ft ft of torque, it seems odd that GM would make the Camaro less powerful than the Caddy with the same engine.

How About a Twin Turbo V6?
We can be almost sure that the 2016 Chevrolet Camaro will come powered by the same 3.6L V6 that powers almost every vehicle in the GM family in the base model while the new 6.2L LT1 V8 from the C7 Corvette Stingray will power the 2016 Camaro SS. The base V6 would battle the 2015 Mustang base model and the Camaro SS would battle the new Mustang GT while the rumored 2.0L turbo would go head to head with the new Mustang EcoBoost. Interestingly, there are also rumors that the twin turbo 3.6L V6 from the CTS VSport could end up in the 6th gen Camaro lineup and while that seems unlikely right now – I think that it would be a great move. I had the pleasure of driving the CTS VSport a while back and I was blown away by the new twin turbo V6, as with 420 horsepower and 430lb-ft of torque, it made the roomy midsized sedan an impressive performer. That CTS weighs around 4,000lbs and with the 6th gen Camaro expected to be a bit lighter than the current Camaro, that twin turbo V6 could really make for one awesome Camaro package. The problem is that it would be awfully close in performance numbers to the LT1 V8 so it could be tough to make a good business case for that TTV6, but it would likely be far more efficient than the LT1 V8 while offering just a touch less power. It is farfetched and fairly unlikely – but the CTS VSport engine in the Camaro would most certainly be awesome.

The 2016 Chevrolet Camaro is expected to debut at the 2015 North American International Auto Show in Detroit, meaning that we have several months to continue to discuss the rumors before we get the real digs on the 6th gen GM muscle car.

(The image at the top of the article is a 2015 Camaro 1LE – because there arent any good pictures of the next gen Camaro!)

Toyota vs Tesla: Which Stock To Buy These Days
For Some Former Daimler Managers Daimler Is Authority, While Tesla Is Like a Startup
END_OF_DOCUMENT_TOKEN_TO_BE_REPLACED