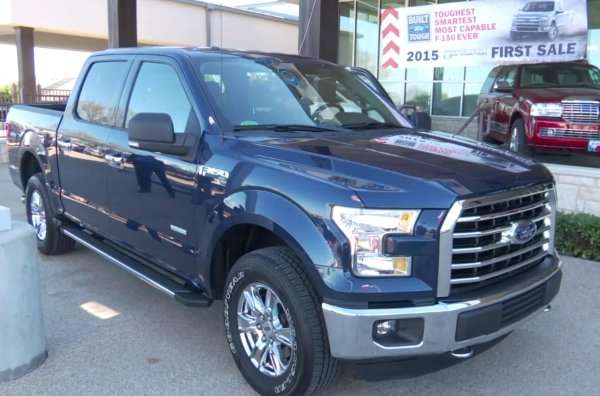 The 2015 Ford F150 is expected to continue the incredible success of the F Series lineup and while Ford trucks sell well in pretty much every state, Texas is the key battleground for the American truck market. With that in mind, it should come as no surprise that the first 2015 F150 sold was delivered to a Texas dealership, but the first aluminum F150 comes with an extra dose of media attention, as it was sold to a man with a famous name.

Folks around New Braunfels likely recognize Tim Kingsbury’s name for his service as the head coach of the New Braunfels high school varsity football team, but football fans nationwide are more likely to recognize the Kingsbury name for Tim’s son, Kilff. Kilff Kingsbury is the head coach of the Texas Tech Red Raiders football team- the same Red Raiders that came just two points short of beating the #5 Baylor Bears this past weekend.

The Kingsbury family is surely accustomed to being in the media for their success on the football field but today, the Kingsbury name is making a splash in the automotive world as the elder coach is the first person in America to official take the plunge and buy an aluminum bodied 2015 F150.

The First 2015 F150 Sold
The first 2015 Ford F150 sold to Tim Kingsbury is an XLT model in Blue Jeans Blue with the SuperCrew cab, the 5.5 foot bed, the XLT Chrome Package, four wheel drive and the 3.5L EcoBoost V6. Not including other options, this truck carries an MSRP starting around $45,000 and when you consider the popularity of those features mentioned above – including the XLT package, four wheel drive, the largest cab and the 3.5L EcoBoost – this truck should be a great deal like the majority of the new F150s sold.

It is expected that the 2015 Ford F150 XLT will be one of the most popular trimlines and with the high take rate of four wheel drive and the largest EcoBoost engine, many of the 2015 F150 pickups sold in America will resemble Coach Kingsbury’s truck.

The 2015 F150 Traveling Across the Country
Tim Kingsbury ordered his 2015 Ford F150 back in August when the order banks first opened, as he had planned to replace his current EcoBoost-powered F150 with the new version. With Kingsbury having ordered his F150 when orders were first being taken, this first delivery should be followed by a great many more pre-orders being answered with a new pickup. Also, this first wave of deliveries will be accompanied by the first collection of trucks for dealership stock, allowing more prospective buyers a chance to experience the new aluminum pickup in person including a test drive – which will almost certainly lead to a boom in sales over the next few months.