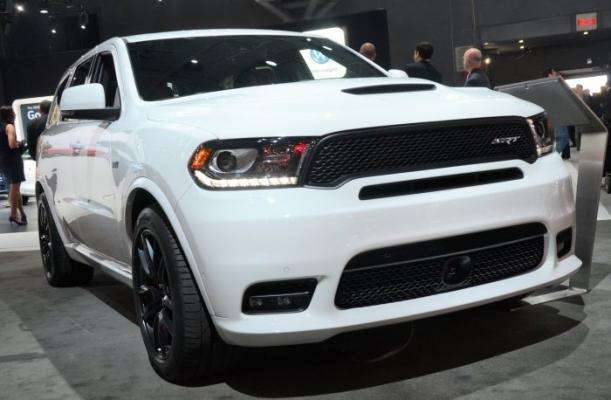 Taking a Guess at the 2018 Dodge Durango SRT Pricing

Since the news of the 2018 Dodge Durango SRT was announced a few months back, we have been peppered with questions focusing on the pricing of the high performance SUV and while we don’t have any concrete numbers thus far – we can take some guesses about the 2018 Dodge Durango SRT pricing based on the pricing of the closely related Jeep Grand Cherokee SRT and the other Dodge models.
Advertisement

Since the current generation Dodge Durango was introduced in R/T form, Mopar fans have been demanding a higher performance model. While the Jeep Grand Cherokee has long been offered in SRT form, the Durango – which is based on the same underpinnings as the Jeep – has never been offered with any of the higher performance SRT Hemi engines. Preference for the Dodge brand and the desire for a high performance 3-row Mopar hauler led people to continue calling for a Durango SRT and at the Chicago Auto Show – that high performance Dodge SUV was finally introduced.

Click here for a full rundown of the 2018 Dodge Durango SRT.

The 2018 Dodge Durango SRT will be similar in its basic packaging to the current Jeep Grand Cherokee SRT, with a high performance suspension setup, a big Brembo braking package, a premium interior, a unique exterior and, of course, the 392 cubic inch SRT Hemi. The key difference is that the Durango has three rows of seating, so the Dodge is slightly roomier, but other than cosmetic differences, the two SRT SUVs will be closely related in every way.

Does that mean that the 2018 Dodge Durango SRT pricing will be similar to the Jeep Grand Cherokee SRT?

Current Durango and Grand Cherokee Pricing
We cannot directly compare the current pricing numbers of the Dodge Durango and the Jeep Grand Cherokee on a trimline for trimline basic because the Jeep has more trimlines with more standard features along the way. We can look at the base pricing of each and see that the Jeep starts about $00 more than the Dodge and just looking at MSRP, the top of the line Grand Cherokee Summit costs about $5,000 more than the top of the line Durango Citadel Anodized Platinum. When pricing out those two premium models, the Jeep’s 4WD system costs $500 more than the Dodge’s, but when you look at the standard features of the Jeep, the difference in price makes sense. The premium Durango can be upfitted with various option packages to offer every feature that the Jeep does, but that brings the price up within a thousand dollars of the Jeep.

In short, the Jeep seems to generally have a higher price point than the Dodge, so based on that, I would expect that the 2018 Dodge Durango SRT pricing will start slightly lower of the SRT Jeep’s $67,990 MSRP.

SRT vs Non-SRT Pricing
Next, we can look at the pricing of the various SRT and non-SRT trimlines for the Grand Cherokee, as well as the Charger and Challenger.

The SRT Jeep pricing starts around $13,400 more than the premium Summit model and the changes in features with the two Jeep models should be comparable to the Durango.

The Challenger and Charger both have a handful of trimlines which come with the SRT 392 Hemi, so it makes the comparison a little tougher, but the Challenger T/A and the Charger Daytona are the most heavily loaded 5.7L Hemi models and the jump to the SRT 392 model will cost you $12-13k.

If we take the price of the most heavily loaded 2017 Durango (Citadel Anodized Platinum) and add $13,400 to it, we get an MSRP of right around $61,000. The company tack on some other small charges and bring the price up to $64,000 while still leaving a several thousand dollar gap to the Jeep, but in the long run, we would expect to see the SRT Durango in the range of $59,000 to $65,000, making it less expensive than the SRT Jeep – even if only by a small amount.

LG's New EV Battery Plant Is a Welcome News for Tesla
Tesla Giga Berlin's New Hurdle: It's Not Only the Gov't, but Now Tesla Itself
END_OF_DOCUMENT_TOKEN_TO_BE_REPLACED