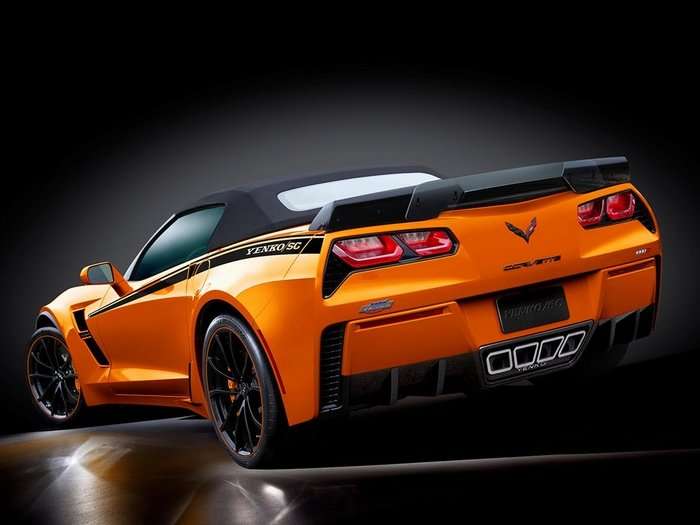 The Yenko name is being kept alive by Specialty Vehicle Engineering in New Jersey and their latest creation is the Yenko/SC Stage II Corvette – a 1,000-horsepower supercar based on the C7 Grand Sport, limited to 25 units and starting just north of $135,000.
Advertisement

Specialty Vehicle Engineering in New Jersey is the current owner of the legendary Yenko name and over the course of the past decade or so, they have been rolling out high performance Chevrolet products that would make Don Yenko proud. In the past, we have talked about their modern Yenko/SC Camaro in stage I and II form along with the stage I Corvette Grand Sport, but today we look at the stage II package for the C7 – packing the same 1,000 horsepower output as the Camaro.

Yenko/SC Stage II
The Yenko/SC Stage II starts under the hood, where the shop removes the stock 6.2-liter LT1 engine and replaces it with one that has been bored and stroked to 6.8 liters. The engine is then fitted with modified cylinder heads, a larger throttle body, forged internals, a 2.9-liter supercharger, an upgraded fuel system and a big exhaust system. When this engine is installed and tuned, it makes a whopping 1,000 horsepower at the crankshaft.

Finally, in addition to the monster engine build, the Yenko/SC Stage II Corvette comes with the key features of the Grand Sport, including Magnetic Ride Control, uniquely-tuned stabilizer bars, the high performance braking package and lightweight wheels wrapped in sticky rubber – all of which aides in making the most of a thousand horsepower.

The Cost
There are two downsides to the modern Yenko/SC Stage II Corvette Grand Sport.

First, it is limited to just 25 units, so while you can order one of these customized Corvettes at your local Chevy dealership, they could sell out in a hurt.

Second – and most notably – the Yenko/SC Stage II package costs $68,995 with the 7-speed manual transmission or $77,995 with the 8-speed automatic. Mind you, those numbers do not include the price of the Corvette, so when you factor in the base price of a new Grand Sport coupe with the manual transmission, you have a start price of $66,590. When you tack on the Yenko/SC Stage II package, that number climbs to $135,585 – and that is before adding any options from Chevrolet. For example, our base price is for the 1LT version of the Grand Sport, but opting for the 3LT package will take the total price up over $145,000, so while this package is impressive for a variety of reasons – it is most certainly not a budget option.

DeanMcManis wrote on July 25, 2018 - 2:49am Permalink
Like the Hennessy 1000HP CTS-V that you just reported on, this also sounds like a cool monster. But I am similarly curious if it is any quicker than the impressive ZL-1 Corvette, because both are only RWD and 1000HP probably will just spin the tires for many drivers, even if you swap in street legal drag radials.