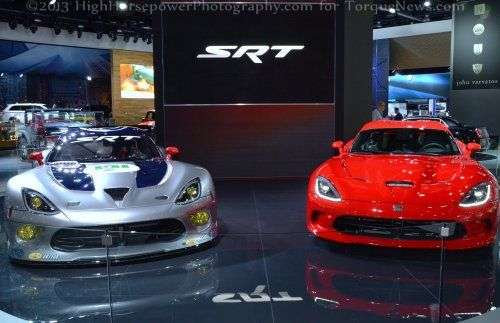 Based on an official yet vague company document released today, it appears as though the new SRT Viper will receive a refresh in 2015 while the high performance Dodge Dart SRT looks like it might not arrive until 2016 at the earliest.
Advertisement

The information provided on the future SRT Viper and Dodge Dart SRT as part of the 2012 financial presentation offers a tremendous amount of information while being incredibly vague at the same time. However, with a little common sense combined with a look at what has gone on with the Chrysler Group in the past few years, we can formulate a few educated guesses as to what the future of the Street and Racing Technology brand could look like. Unfortunately, there are no new models planned for the SRT brand between now and 2016 so it looks as though the high performance Dodge Dart SRT could be several years from production.

The vague information on the future of the SRT brand starts in 2012 and continues up to the 2016 year beginning with last year’s launch of the 2013 SRT Viper. In 2013, this information lists the debut of the 2014 Jeep Grand Cherokee SRT, followed by three refreshed vehicles in 2014, one refreshed vehicle in 2015 and a new Chrysler-built SRT vehicle in 2016. Beyond that, no information is offered but based on the recent debuts, the popular rumors and a little common sense – we can predict what is coming.

First of all, the three refreshes planned for the SRT lineup in 2014 will almost certainly bring about the next generation of the Dodge Charger SRT, the Dodge Challenger SRT and the Chrysler 300C SRT. There are five vehicles in the current SRT lineup and with the SRT Viper being brand new and the refreshed Jeep Grand Cherokee SRT already introduced; the only vehicles left to undergo a refresh are the high performance versions of the Charger, Challenger and 300C. It has long been rumored that the Challenger is the next vehicle to receive a refresh in the Dodge lineup so the SRT Challenger refresh could be similar to the recent Grand Cherokee SRT refresh – which benefits from the facelift seen across the entire model. More importantly, there is a popular rumor that the SRT variant of the Charger, Challenger and 300C will be powered by a new 6.2L supercharged V8 that could offer as much as 550 to 600 horsepower. The current Charger SRT8 and Chrysler 300C SRT8 were introduced in 2010 as a 2011 model year vehicle so having a refresh debut in 2014 as a 2015 model year vehicle would make sense. On the other hand, the Challenger hasn’t been significantly refreshed since being introduced in 2006 for the 2008 model year so a facelift for the brawny Mopar muscle car is well deserved.

Next, the recent business plan update shows that the SRT brand will see another refresh in 2015 and with the new Charger, Challenger and 300C debuting in 2014 after the Grand Cherokee SRT debuted in 2013 – the SRT Viper is the only vehicle left to be refreshed. This will most likely be a less dramatic refresh that will bring about few major changes to the Viper Coupe but the 2015 debut of a refreshed Viper could include a high performance ACR model and possibly the return of the Viper Convertible/Roadster. More importantly, the 2015 Viper refresh will likely come with some improved performance measures to help the Viper keep up with the high performance Joneses of the world.

Finally, the Chrysler Group new business plan update shows that the SRT brand will debut a new Chrysler built model in 2016. There have long been rumors that Chrysler was developing a small version of the Challenger that will more closely compete with the Ford Mustang and Chevrolet Camaro that will wear the name “SRT Cuda”. This 2016 SRT brand debut could be that new high performance Cuda but recent rumors that the next generation Challenger will be smaller than the current models somewhat crush the rumors of a new SRT model sporting the Cuda name. The 2016 SRT debut could also be the Dodge Dart SRT or the SRT Viper Convertible/Roadster. Insider reports claimed that the high performance SRT variant of the popular Dodge Dart was on display at the 2012 national dealer convention but with no new vehicles on the Chrysler business plan between now and 2016 – those hoping for a high performance SRT sport compact may have a painful wait over the next 3 years. Finally, there is the possibility that the 2016 debut is the drop top version of the SRT Viper and if we haven’t seen a convertible/roadster Viper by 2015 there will be a much better chance that this 2016 model is a topless supercar.

There is also the idea that the 2016 SRT brand debut could be the return of a high performance Ram 1500 pickup but shy of the few SEMA Show vehicles that showed a light duty Ram pickup fitted with an SRT drivetrain – there has been little to suggest that an SRT Ram is on the way. However, when I spoke with Ralph Gilles last summer, he confirmed that the company does see a market for a high performance pickup. I am a lover of fast trucks so maybe I am just being hopelessly romantic but the possibility does exist that SRT will offer a high performance truck in the future.

Unfortunately, these plans will upset many Chrysler enthusiasts who are eagerly awaiting the return of the Mopar sport compact that is expected to be the Dodge Dart SRT. Based on this business plan, there will be no new models to the SRT brand until 2016 but the good news for lovers of Mopar Muscle is that the brand will see something new in each of the next three years and that could include a seriously powerful new engine. Stay tuned…things should really be heating up for the high performance Mopars during the course of the next few years.

Again, this is all based on speculation and things could most certainly change over the next few years but right now, the detailed plans above seem to make more sense that other possibilities.

Elon Makes a Cybertruck Statement With an Action, But Quiet in Words
Tesla's Record Month in China: Doubled Registrations in March 2021
END_OF_DOCUMENT_TOKEN_TO_BE_REPLACED