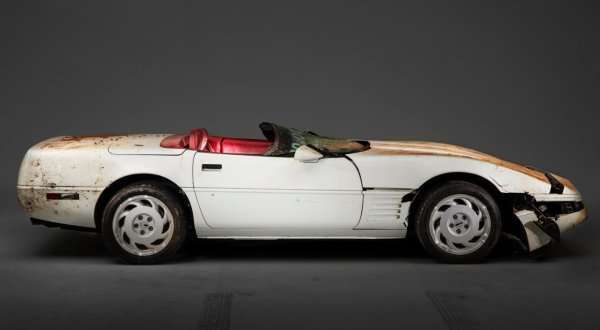 The General Motors team tasked with restoring three of the eight historic Chevrolet Corvette show cars that were swallowed up by a sinkhole under the National Corvette Museum have started on the second of the cars, this time working on fixing up the 1992 Corvette that was the 1 millionth Corvette ever built.
Advertisement

Back on February 12th, 2014, a sinkhole under the Skydome exhibit at the National Corvette Museum opened up the middle of the floor, swallowing up 8 historic Corvette show cars. At first, GM pledged to restore all eight of these damaged Corvettes, but once they had removed the eight cars – or what was left of them – the team decided to focus on restoring three of the cars.

After excavating the eight damaged Corvette show cars from the rubble under the National Corvette Museum, the officials from both General Motors and the museum decided that only three of the cars could realistically be repaired. This list included the 1962 Corvette, the 1992 1 millionth Corvette built and the 2009 ZR1 Blue Devil. The 40th anniversary Corvette was effectively replaced when a generous private owner opted to donate her 1993 40th Anniversary Corvette, but the other four – the 2009 1.5 millionth Corvette, the 1993 ZR-1 Spyder, 1984 PPG Pace Car and the 2001 “Mallett Hammer” Z06 - are just too badly damaged to be repaired so they will remain in their damaged state in the museum.

The Three to Be Fixed
The 2009 Blue Devil Corvette was the least damaged and once lifted out of the hole, the team was able to start the engine and drive it away. That restoration was completed last year while the team turned their attention to the 1992 1 millionth Corvette and the 1962 Corvette. The restoration process of the vintage ’62 Corvette convertible will start later this year, but right now, the team working on rebuilding these three show cars are busy transforming the 1992 Corvette from a sad reminder of Mother Nature’s power to a proper white with red leather Corvette.

Today, GM offered up a short video showing exec Ed Welburn with the 1 millionth Corvette in its current state, with many of the major repairs complete and the final stage of restoration about to begin. This video includes input from the project leader, who walks us through the ins and outs of repairing a car that was crushed by the earth.