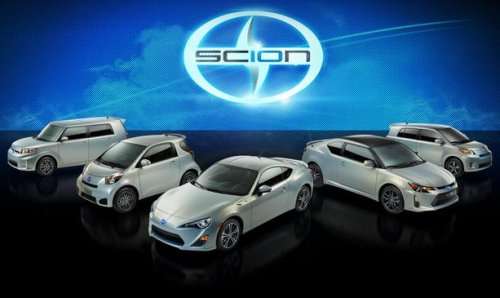 2013 marks the 10th anniversary of the Scion brand in the United States and to celebrate, the brand will issue limited editions of the new Scion 10 Series package for the entire current brand – bringing a unique look to the FR-S, the iQ, the tC, the xB and the xD with varying production figures for each.
Advertisement

The new Scion 10 Series offers a unique package of features that will be applied across the entire current brand lineup and while there are no performance upgrades included, this new limited edition 10th anniversary package brings some very cool features to the FR-S, tC, iQ, xB and xD. The most noticeable feature of each is the package specific “Silver Ignition” exterior paint that looks to be a sort of pearlescent silver while the most unique feature is the LED backlit Scion badges on the front and rear. These badges glow bright blue when the car is unlocked with the key fob and honestly, I think that this is an incredibly cool feature that Im surprised that someone hasn’t already done with the boom in LED technology. The Scion xB, xD and iQ 10th anniversary edition models will wear dark graphite wheels while the tC sports a set of black rollers. The FR-S Scion 10 Series comes with the same wheels as the rest of the FR-S lineup with black pockets and a machined face. While the FR-S doesn’t get special wheels, the Series 10 FR-S wears integrated LD daytime running lamps, HID headlights, dual automatic climate control and push button start.

"The Scion 10 Series celebrates 10 years of the brand's passionate approach, iconic products and success inviting a new, younger buyer to the Toyota family," said Scion Vice President Doug Murtha. "Scion heads into its second decade revved up by a strong product line that continues to stand out on the road."

On the inside, the new Scion 10 Series edition models all wear silver seat belts, a blue glowing LED shift knob that has a tiny solar panel on the top to power the LD and a special sequentially numbered badge to acknowledge the limited nature of each vehicle. Also, when the car is unlocked and the driver climbs in, there is an illuminated badge on the dash that fades to the number 10.

The interior (and exterior) features of the new Scion 10 Series are all very simple but the fact that there are a couple truly unique items like he glowing exterior badges and the solar powered light up shift knob, Scion has gone the extra step in designing their lineup of 10th anniversary vehicles. As simple appearance packages go – the Scion 10 Series is a home run.

The bad news is that only 10,000 examples of the Scion 10 Series will be built. The new redesigned Scion tC will have 3,500 units, the FR-S will have 2,500 units, the xB will have 2,100 units, the xD will have 1,000 units and the compact iQ will have 900 units built. Honestly, those numbers strike me as a little odd as I would expect that the FR-S would have the most demand but perhaps the popularity of the Scion FR-S, the Toyota GT86 and the Subaru BRZ along with the production constraints are at fault for there not being more special edition rear drive sports cars headed to the US.

Toyota expects to have these limited edition vehicles in dealerships in June so while pricing is not currently available on the Scion website, it shouldn’t be too long before pricing becomes available for these 10,000 special edition vehicles.