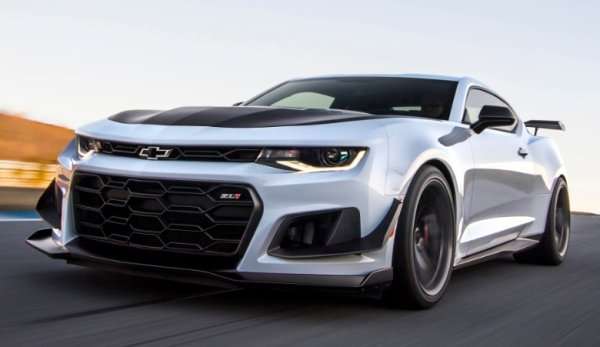 The Rumored Z/28 is Actually the Chevrolet Camaro ZL1 1LE

This past weekend, General Motors rolled out the Chevrolet Camaro which many of us expected to be the next Z/28, but it is actually the new ZL1 1LE – which hits the market as the most track capable, factory-built Camaro of all time.
Advertisement

Last year when Chevrolet was testing the current Camaro ZL1 at the Nurburgring in Germany, video surfaced showing a different Camaro crashing hard in one of the more technical sections of the track. This mysterious Camaro was camouflaged well enough that we couldn’t tell exactly what it was in terms of the trimline, but the huge wing and aggressive front fascia seemingly made it clear that the wrecked Camaro was not a new ZL1. This damaged Camaro, with its aggressive aero package, was immediately presumed to be the 6th generation Camaro Z/28, and that presumption made sense.

The 5th gen Camaro Z/28 was more aggressively designed than the 5th gen Camaro ZL1, so when an obvious 6th gen test car with a more aggressive exterior design was caught on film – it all but secured the belief that there was a new Z/28 coming.
Chevrolet passed that off as being nothing more than a test car fitted with some prototype body bits, but we all knew better – or at least we thought that we did. That was surely the new Z/28 and sooner or later, we would all learn the truth.

Welp, the truth was revealed this past weekend at the Daytona 500 and it seems as though the car which crashed in Germany was actually a new ZL1 with some unique body parts. The car we watched wreck at the Nürburgring wasn’t the 6th generation Camaro Z/28 – it was the new Camaro ZL1 1LE – and it is being marketed as the most track capable Camaro ever.

“The track-focused 1LE package offers progressive levels of performance across the Camaro lineup, from the V6 1LE to the SS 1LE,” said Al Oppenheiser, Camaro chief engineer. “But with the new ZL1 1LE, the progression takes a quantum leap — this is the ultimate track-day Camaro.”

The 2018 Camaro ZL1 1LE
The 2018 Chevrolet Camaro ZL1 1LE is based on the 2017 Camaro ZL1, starting with the 650 horsepower LT4 V8 mated to a 6-speed manual transmission. This engine helped to make the ZL1 the most track capable Camaro ever, but to allow the 1LE version of the ZL1 to smash the non-1LE numbers, the Chevy team made big changes to the aerodynamics and the handling components of this new muscle car.

Most noticeably, the 2018 Camaro ZL1 1LE has a huge carbon fiber rear wing paired with a set of dive planes on each corner, all of which add 300lbs of extra downforce at high speed. The ZL1 1LE also benefits from new wheels and tires, with lightweight forged aluminum that are an inch wider than the normal ZL1 wheels and wrapped in Goodyear Eagle F1 Supercar 3R tires which were designed specifically for this Camaro. These tires provide about 10% more contact with the ground, allowing the ZL1 1LE to reach cornering forces of 1.1G, but this wheel/tire package weighs 1.5lbs less per corner.

Next, the adaptive suspension from the 2017 Camaro ZL1 is replaced by the Multimatic DSSV (Dynamic Suspension Spool Valve) setup which was first introduced in the 5th generation Camaro Z/28. These dampers allow for adjustment to the front ride height of the vehicle thanks to new, adjustable camber plates offering up to 3 degrees of negative camber. Also, while the rear end doesn’t offer as much adjustability, there is a new stabilizer bar out back with 3-way adjustment.

Finally, in addition to the lighter wheels, the 2018 Camaro ZL1 1LE cuts weight via a lighter rear window and a lighter rear seat, cutting a total of about 60lbs when compared to the non-1LE ZL1.

We don’t get any detailed information on the pricing or availability on the 2018 Chevrolet Camaro ZL1 1LE, but we know that it will hit dealerships later this year and pricing will be discussed prior to that. We also don’t get any track times, but the company stated that on their 2.9-mile Milford Proving Grounds test track – the 1LE was 3 seconds faster than the current Camaro ZL1 coupe.

Hopefully we will get a lap time for the 2018 Camaro ZL1 1LE from the Nürburgring but in the meantime – it appears as though the car which we all believed would be the new Z/28 is actually the new ZL1 1LE.