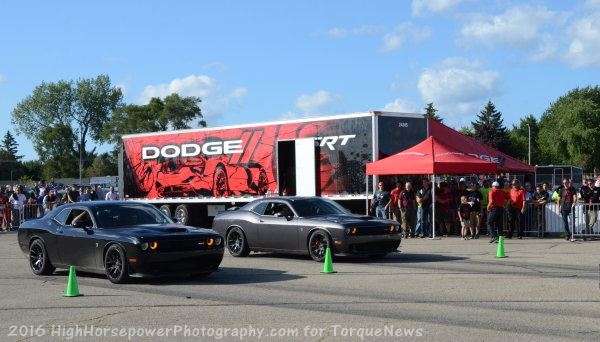 More details have surfaced on the Roadkill Nights by Dodge Detroit event and in addition to the racing registration opening up online, we now know that the racers will be going head to head on Detroit’s Woodward Avenue – legally.
Advertisement

We few weeks back we brought you the news of the 2016 Roadkill Nights by Dodge events in Kansas City and Detroit. The Kansas City event took place earlier this month and more than 12,000 people showed up for the Dodge-sponsored car show and drag race event. Today, we have more details on the Detroit event of the Roadkill Nights by Dodge event, including the opening of racer registration and more details on where exactly this event will be taking place.

Legal Racing on Woodward Avenue
First and foremost, we finally know exactly where the Roadkill Nights by Dodge event will be taking place. We knew that the event would be happening somewhere along or around Metro Detroit’s Woodward Avenue, but we know now that the bulk of the show will take place at the new racing venue - the M1 Concourse in Pontiac, Michigan. We can expect that the car show, the Dodge Hellcat thrill rides, the live music and the food trucks will all be somewhere on the grounds of the M1 Concourse, but oddly, the racing will not take place on the M1 race track.

Instead, the drag racing portion of the Roadkill Nights by Dodge event will actually happen on the stretch of Woodward Avenue bordering the M1 property. To be more specific, the racing area will be Woodward Ave, between Rapid Street and South Boulevard, and while this stretch of Wood is more than a half mile long, I would expect the actual racing action to be restricted to an 8th mile. The proximity of the racing area on Woodward to the M1 Concourse facility should make it easy for spectators to go back and forth between the racing area and the rest of the Roadkill Nights by Dodge attractions, while it will almost make it easy for the racers to get back to the staging area when their run is finished.

“Woodward is one of (if not the) most famous ‘Muscle Car Corridors’ in the country and, as far as we know, this is the first time ever that street racing on it will be legal,” said Tim Kuniskis, Head of Passenger Cars, Dodge, SRT, Chrysler and FIAT – FCA, North America. “Drag racers will be able to show their muscle when Woodward is closed from South Boulevard to Rapid Street in Pontiac to create what is sure to be an epic kick off to the weekend’s cruise events.”

Racing Registration is Open Now
If you have a car that you would like to enter into the racing portion of the Detroit Roadkill Nights by Dodge event, registration is now open. A racing pass costs $50 and space is limited to just 250 race entries – so if you want to race legally on Woodward Ave, you would be wise not to wait to register. Click here to register.

Some of you might be questioning the $50 racing fee since the 2015 Roadkill Nights by Dodge event in Detroit was free. Unfortunately, there were a few vehicles that really had no place being involved in a racing event. Sure, they passed the modest technical inspection, but some people showed up to race their junk simply because it was free. No one wants to watch someone with a rotted out 1996 Chevy Trailblazer racing, so to weed out the people who only showed up because racing was free – the racing isn’t free this year. This is bad news for those cheapskate races, but it is good news for the spectators, as we should see a great collection of very fast cars charging down Woodward Ave.

So, why will people pay $50 to race on Woodward Ave? Well, first of all, the whole program is a ton of fun, so racers will likely show up just to show off for the massive Woodward Dream Cruise crowd. More importantly, there is a $10,000 cash prize for the fastest Dodge car in attendance, with the runner-up Dodge winning $5,000 and the semi-finalists in the Dodge car class will get $2,500 and $1,500. Additionally, while the big money prizes are only open to Dodge cars, there are cash prizes of $500 and $250 for the top two non-Dodge cars – but trucks are not permitted in either of the classes.

Racing Rules
All of the cars racing at the 2016 Roadkill Nights by Dodge event in Detroit are required to be street cars. All race vehicles are required to have valid license plates, current insurance coverage, DOT-approved tires and they must all be driven to the event – no trailering in race cars. Also, all drivers must have long pants, closed toe shoes and an SA or M 2005 or newer helmet.