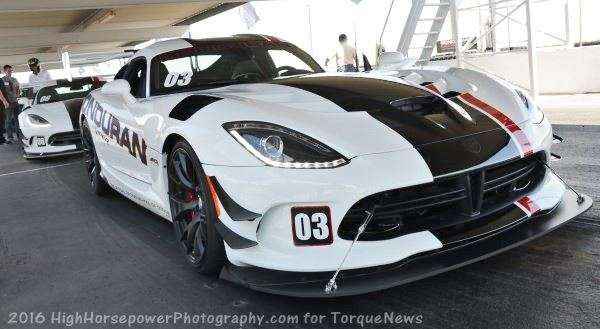 While attending the SRT Experience at Bondurant Racing School last week, I had a chance to go for a ride with LeMans champion Justin Bell in the new Dodge Viper ACR around the 1.6 mile road course – and the legendary racer had great things to say about the record-setting Mopar supercar.
Advertisement

Last weekend, I had the extreme pleasure of attending the SRT Experience at Bondurant Racing School in Arizona, where I spent the day training on-track with the Challenger SRT 392, the Challenger SRT Hellcat, the Charger Scat Pack, the Charger SRT Hellcat and the Viper TA2.0. As if that didn’t make the SRT Experience incredible enough, Bondurant had lead instructor and former LeMans champion Justin Bell on hand to give us a ride in the wicked new Dodge Viper American Club Racer (ACR).

LeMans Winner Justin Bell
If you are unfamiliar with Justin Bell, here is a quick rundown of his key racing accomplishments. In 1997, Bell won the FIA GT2 World Championship in a Chrysler Viper (they don’t use the Dodge name in Europe) and in both 1998 and 1999, Bell won GT2 class in the 24 Hours of LeMans endurance race. In short, he has won some of the world’s most grueling endurance races in a Dodge Viper race car, so it is fitting that Bell – who now leads the team of racing instructors at Bondurant Racing School – would be giving joyrides in the new Dodge Viper ACR.

As a longtime fan of the Viper endurance racing program, I was excited to not just ride with Justin Bell on a race track - but I would be riding in the baddest American road car ever. It sounds silly to call it a "dream ride", but that is exactly what it was - and it would be for many Dodge, Viper or road racing fans.

The American Club Racer
If you are somehow unfamiliar with the new Viper ACR, this car has set 13 track records around the United States and it is expected that the new ACR will eventually take a swing at the previous generation’s Viper ACR Nürburgring record. This is unquestionably the most track capable, street legal car ever offered by an American automaker and it is very capable of hanging with the best road-going supercars in the world.

When you pair up a championship road racer with the most track capable Dodge Viper of all time, the result is an incredible ride-along program. After I had spent the day behind the wheel of the Viper TA2.0, it was an amazing opportunity to ride shotgun with Justin Bell in the new Viper ACR. Going from the TA2.0 to the ACR (and putting a skilled road racer into the hot seat) showed just how much of a difference the ACR package upgrades make, as the new ACR grips all of the turns and slows for the tightest turns far more aggressively than the TA2.0 – which is an incredible road racing vehicle in its own right.

While Justin Bell ripped around the Bondurant road course, he was quick to praise the abilities of the new Viper ACR, even though he had only had a chance to take a few test laps when I climbed in. Fortunately, I had my GoPro running and I captured my remarkable ride-along experience with LeMans champ Justin Bell in the Viper ACR. That video is just below, so crank up your speakers and enjoy!