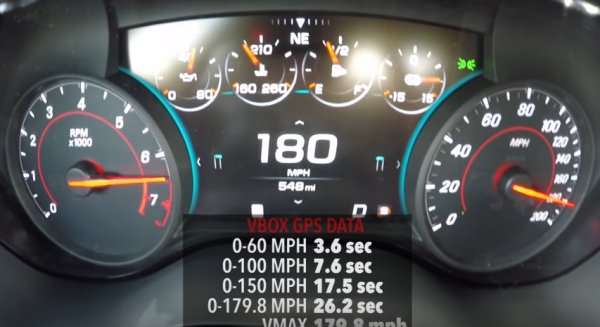 A new video has been posted on YouTube by the crew from Hennessey Performance showing the 2017 Chevrolet Camaro ZL1 making a hard run from a stop up to 180 miles per hour, with an in-car camera view which gives us a great chance to hear the LT4 roar at full throttle while also providing timing numbers along the way.
Advertisement

The 6th generation Chevrolet Camaro ZL1 is the quickest, fastest and most powerful Camaro every, with the 650 horsepower LT4 allowing it to dash through the quarter mile in the mid-to-low 11 second range along with an official top speed (in far more than a quarter mile) of 198 miles per hour. To give us a good idea of what a hard pull in the new Camaro ZL1 looks and sounds like, Hennessey Performance made a video of the action which shows the gauge cluster during the run, along with a performance timer readout – with fairly impressive results.

Camaro ZL1 0-180
The video below shows a brand new, stock 2017 Chevrolet Camaro ZL1 with the 10-speed automatic transmission making a hard run from a standstill up to 180 miles per hour. Since a 30 second video of a car accelerating in a straight line doesn’t offer all that much information, Hennessey mounted the camera just behind the steering wheel, so all we see during the run is the gauge cluster, but this is probably the most useful view for a run of this nature.

In the video below take note of the boost gauge on the right side of the top row of smaller gauges. Based on the graduated lines in the boost gauge and what we know of the LT4, the stock boost is around 10psi, which is the line just before the 15psi mark. However, when the Camaro launches, the boost gauge barely reaches the first line in 1st gear and it comes just short of the second line in 2nd gear. In other words, the new Camaro ZL1 is running at lower boost levels through the first two gears, presumably as part of a torque management system. Even with those low boost levels before 3rd gear, the new ZL1 can still blast to 60 in the mid-3s and 100 in the mid-7s.

In addition to giving us a great view of the gauges during the run, this camera angle provides a great sound clip of the Camaro ZL1 in action, so crank up your speakers and enjoy!

Toyota vs Tesla: Which Stock To Buy These Days
For Some Former Daimler Managers Daimler Is Authority, While Tesla Is Like a Startup
END_OF_DOCUMENT_TOKEN_TO_BE_REPLACED