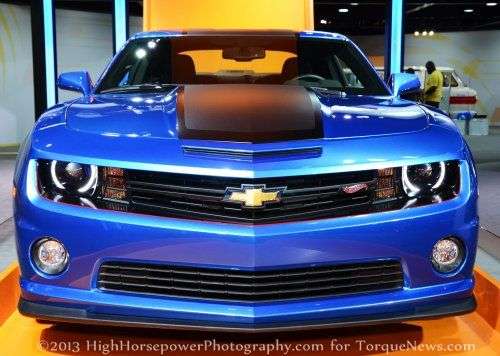 We are still working our way through all of the debuts at the Geneva Motor Show but we have just learned that the refreshed 2014 Chevrolet Camaro will make its grand debut at the 2013 New York International Auto Show later this month – along with a handful of other American auto show debuts from Chevy.
Advertisement

The 2013 New York Auto Show will feature Chevrolet’s lineup of 2014 model year performance cars including the refreshed Chevrolet Camaro. Little is known about the refreshed Camaro but the company promises that it will “(advance) the design and performance attributes that have made it the most popular sports car under $50,000 for three consecutive years”. Spy shots floating around the internet of what many believe could be the 2014 Chevrolet Camaro show a car that looks pretty much identical to the current model except for some very minor changes such as a revision to the lower front fascia opening. The smaller lower front fascia opening surely isnt the only thing that GM has planned for the 2014 Camaro but with no better indication as to what is coming – the whole discussion is based on speculation. However, we would have to think that there would at least be enough changes to the exterior so that the 2013 and 2014 model year Camaro can be deciphered when parked side by side.

As General Motors made sure to point out in the announcement of the 2014 Chevrolet Camaro debuting at the 2013 New York Auto Show, the bowtie clad muscle car has been the bestselling car in the class for each of the last three years after the Ford Mustang had been the king of the class for decades. This is good news for Chevy but the bad news is that the Camaro has gradually seen sales figures slide over the past two years. The Camaro narrowly beat the Mustang for the 2012 calendar year and with an all new Mustang coming in the next 12-16 months – the battle to be America’s bestselling muscle car will get a whole lot tougher very soon. When the next generation Mustang arrives, Ford can almost guarantee a spike in sales that will come as a combination between deep discounts on “new old models” along with the big rush to grab up the new 2015 S550 Mustang.

"Chevrolet customers have validated our performance credentials, and we're going to give them even more reasons to be enthused," said Mark Reuss, president, GM North America.

In addition to the refreshed 2014 Chevrolet Camaro, the upcoming New York Auto Show will bring about the American auto show introduction of the 2014 Chevrolet Corvette Stingray Convertible following the Geneva Motor Show debut along with the auto show debut of the powerful new Chevrolet SS performance sedan. Of course, the 2014 Corvette Stingray Coupe will accompany the new droptop Stingray Convertible so between the two new Vettes, the new SS performance sedan and the revised 2014 Camaro – there will be well over 2,000 horsepower of Chevy performance for the crowd to enjoy in the Big Apple. The two Corvettes are expected to pack 450 horsepower each for a total of 900 horsepower while the Chevy SS will likely add 415hp of its own to lift the total to 1,315hp. Add to that the 323 horsepower of the Camaro V6 and the 426hp of the Camaro SS and you have a total of 2,167 horsepower from those five Chevy performance models – and that is if the new Camaro doesn’t get a boost in power to accompany the new look. 2,167 horsepower from the same brand that also sells America’s bestselling EV in the Chevy Volt makes it that much more impressive.

The 2013 New York International Auto Show has become one of the highest attended auto shows in the United States and with another big year planned – the Big Apple show should bring about some major changes for the auto industry.

Stay tuned to TorqueNews for all of your biggest automotive news from around the country and around the world!