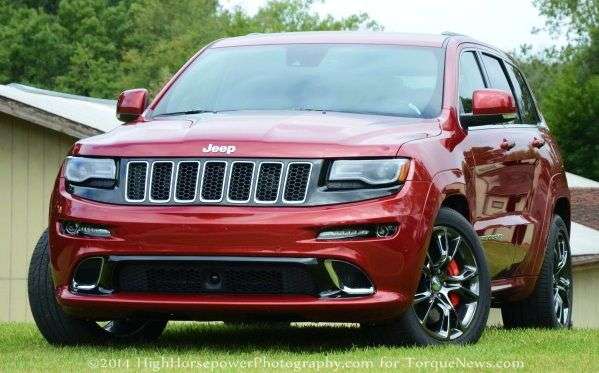 Now that the new Range Rover Sport SVR has set the new Nürburgring SUV record, there is a clear competitor for a Jeep Grand Cherokee SRT Hellcat, as a 707 horsepower Jeep would very likely challenge the Range Rover on the world’s most grueling race course – the Nürburgring.
Advertisement

The Chrysler Group is very proud of the fact that the 2015 Dodge Challenger SRT Hellcat is the most powerful American production car of all time and there doesn’t seem to be any reason that the company wouldn’t eventually roll out a Hellcat powered Jeep Grand Cherokee. After all, the Grand Cherokee has become one of the SRT lineup’s most popular models so it almost seems unthinkable that the SRT team wouldn’t make sure to pack that big, bad blown Hemi under the hood of the best performing Jeep.
It is all but certain that there will be a Hellcat powered Dodge Charger SRT and after that, I cannot think of a single reason that the Grand Cherokee wouldn’t get the Hellcat and thanks to this stunning new Range Rover ‘Ring time – Chrysler has a proper challenger to the future 700+ horsepower Jeep.

The Range Rover Sport SVR is the Fastest SUV
While there are sport utility vehicles available in the global market that pack more power than the new Range Rover Sport SVR, no other non-car has ever gotten around the famed German Nürburgring as quickly as the newest Range Rover. Packing the same supercharged V8 as the Jaguar XFR-S with 542 horsepower being channeled to all four wheels which, when coupled with a high tech suspension package and a high performance braking setup – allowed the Sport SVR to make it around The ‘Ring in just 8 minutes and 14 seconds.

Before the new Range Rover Sport SVR set this impressive record, the quickest official time for a utility vehicle was an 8:19 turned in by the Holden VF SS Redline Ute, which is basically the El Camino version of the car that Americans knew as the Pontiac G8 or the new Chevy SS Performance Sedan. Regardless of what you compare it to, it is hard to call the Holden Ute a real competitor for the likes of the Range Rover Sport, but the Holden was still credited with the utility vehicle record as it made it around the Nürburgring quicker than any other non-car. Before that Holden run, the quickest official Ring time by an SUV was the 2010 Range Rover Sport Supercharged, which made it around the track in 8 minutes and 55 seconds.

It should be noted that while it does not appear on the “official Nürburgring lap time” list, the 2013 Jeep Grand Cherokee SRT lapped The Ring in 8 minutes and 49 seconds so it was quicker than the older Range Rover, unofficially.

The World’s Most Powerful SUV Could Beat the Range Rover
Should the Chrysler Group create a Jeep Grand Cherokee SRT Hellcat model with the supercharged 6.2L Hemi V8 sending over 700 horsepower to all four wheels via an 8-speed automatic transmission and an advanced all wheel drive system, it would be the most powerful SUV in the world while likely also being the fastest in a straight line. At the same time, the SRT team has put a great deal of effort into making the Grand Cherokee SRT one of the best handling SUVs in the world and I would expect a Hellcat model to be any different. Based on that, the arrival of a Hellcat powered Jeep will almost certainly set up a Ring battle between the 707hp Grand Cherokee and the 542hp Range Rover. The big power and smaller stature of the Jeep would give it a big advantage on the long straightaways, but it will be interesting to see if the SRT team can get the big Jeep through the corners fast enough to turn in a better lap time around the 12.9 mile course than the lap turned in by the Range Rover.

The Chrysler Group has made a point of sending their Dodge Viper to the Nürburgring to repeatedly set and defend its production car record, but this battle could be the toughest ever. For the Hellcat Jeep to beat the new Range Rover Sport SVR, it will have to turn in a time of 8:13 or better. For comparison, the 2005 Dodge Viper SRT10 ran a best lap of 8:10 – just to give you an idea of how well the Hellcat Jeep will need to perform to become the fastest SUV around The Ring.

ed seymour ii wrote on November 13, 2014 - 8:50pm Permalink
even if the hellcat didnt come out all you would have to do is add the Hennessey kit and it would have been 600+ HP and still whooped the range rover no question about it.