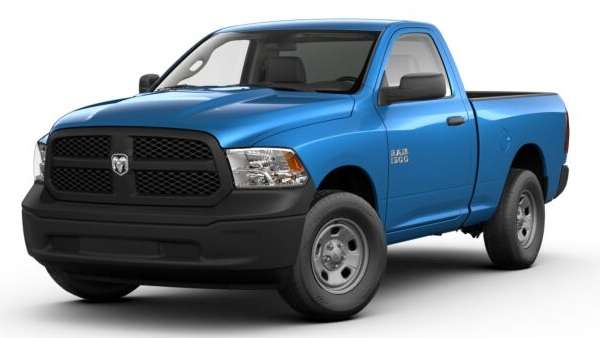 We get a great many questions about the future availability of something like the old Ford F150 SVT Lightning or the Ram 1500 SRT10, but in the absence of a true high performance sport truck intended for on-road performance, the current Ram 1500 Express offers the most bang-for-your-buck in a small half ton pickup.
Advertisement

The last true high performance street trucks sold in America were the 2004 Ford F150 SVT Lightning and the 2006 Dodge Ram SRT10 – both of which had a big, powerful engine, rear wheel drive, a regular cab and a short bed. Since then, the performance trucks from Ford and Ram (as well as GM and Toyota) have been larger trucks, usually with extended cabs, four wheel drive and a design which caters more to off-road performance.

This has created a distinct lack of rear-drive, on-road performance pickups and we regularly field questions from readers asking about a modern F150 Lightning or SRT10 Ram. Unfortunately, there has been no word from any of the automakers about a modern incarnation of the supercharged Lightning, the Viper-powered Ram, the older Chevrolet Silverado 454SS or anything along those lines, but there is an answer for go-fast truck fans who are looking for on-road performance.

In fact, Ford, Chevrolet, Toyota and Ram all offer small, powerful, no-frills trucks which could be the basis for a great sport truck, but when it comes to bang-for-your-back, the Ram 1500 is the leader of the pack.

Before getting into the comparison of these trucks, keep in mind that the sole focus of this discussion is buying a smallish half ton truck with as much power as possible for as little money as possible. This doesn’t take into account things like sound system quality, seating layout, standard interior features, etc – just power, price and the size needed for a proper sport truck.

Small, Powerful Half Ton Trucks
The Ram SRT10, the Ford F150 Lightning and the Chevrolet Silverado all had a handful of key factors in common. They were all regular cab trucks with a short bed (RCSB), they were all rear-wheel drive and they all had a high performance engine – with the Ram SRT10 being the most powerful of the group with 500 horsepower and 525lb-ft of torque.

Looking at the modern options in the half-ton truck segment, you can get a regular cab, rear wheel drive truck with a V8 engine from Toyota, Chevrolet, Ram and Ford, but only the Ram and the Chevy offer a regular cab, short bed design like the older sport trucks. Both the F150 and the Tundra come with a long bed mated to the regular cab in their least expensive configurations, giving them more of a work truck look than a sport truck look, so if you want a regular cab/short bed truck with a powerful engine for as low a price as possible, your only options are the Ram 1500 and the Chevy Silverado 1500 WT.

The Chevrolet Silverado 1500 is also available in a few different trimlines with the regular cab/short bed configuration, but for consistency, we will discuss the entry-level WT model. The “problem” with the Chevy and the biggest factor when looking to build an RCSB sport truck is that the regular cab/short bed Silverado cannot be fitted with the big 6.2L V8, so the most powerful engine that you can get in the Silverado 1500 WT is the 5.3L V8 with 355hp and 383lb-ft of torque. Also, with a price of $30,275, the Chevy costs more while offering considerably less power.

Comparing the Smallest Ford and Toyota
So, the Ram 1500 with the 5.7L Hemi has a big advantage in horsepower, torque and pricing over the comparable Chevy, but what if you were willing to deal with a sport truck with a regular cab and an 8-foot bed?

The least expensive Ford F150 is the XL package, which comes with a regular cab, a long bed, rear-wheel drive and the 3.5L EcoBoost V6 for $30,920. For that price, you get 375 horsepower and 470lb-ft of torque, so while the F150 with the most powerful engine has a little less horsepower and a whole lot more torque, it also almost $1,500 more. The F150 is the only truck to challenge the Ram 1500 from a performance standpoint, with the EcoBoost being the only half-ton engine in a truck of this size with more torque than the Hemi.

Finally, we have the Toyota Tundra SR, which comes with a regular cab, rear-wheel drive, an 8-foot bed and a 5.7L V8 with 381 horsepower and 401lb-ft of torque while carrying an MSRP of $29,865. This is the closest competition to the Ram in terms of pricing, but it still costs more and it still offers less horsepower and torque than the Ram 1500 with the Hemi.

Best of all, if you opt up to the Ram 1500 Express, the price only rises to $30,865 and in addition to the small truck with Hemi power, you also get aluminum wheels and body colored bumper – giving it a sportier look from the factory for less money than the Ford F150 in its most powerful, least expensive configuration.

In the end, if you are looking for a no-frills, half-ton truck to convert into a modern on-road performance truck, GM, Ford and Toyota all have options, but none of those brands offer the combination of a low price and big power as the Ram 1500 – with both the Tradesman and Express trimlines offering big power in a small truck with a small price.