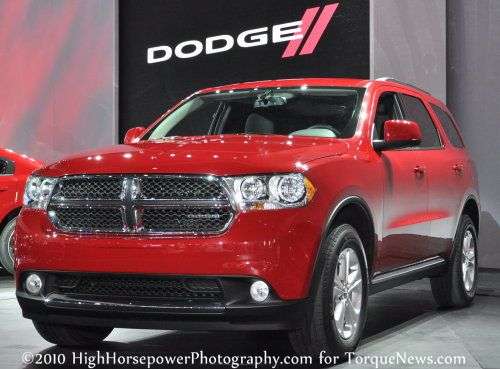 Production begins for the 2011 Dodge Durango

The 2011 Dodge Durango is completely redesigned from top to bottom, inside and out, and yesterday these new SUVs began rolling off of Chrysler’s assembly line at the Jefferson North Assembly Plant (JNAP) in Detroit.
Advertisement

The 2011 Dodge Durango is the first Dodge product ever built at Jefferson North with this plant being responsible strictly for Jeep models since it opened in 1992. The new Durango shares its basic architecture with the popular 2011 Jeep Grand Cherokee, so moving the production from Newark, Delaware (where all of the previous Durangos were built) to Jefferson North makes good sense. This is a plant accustomed to churning out high volumes of sport utes and should the Durango see the popularity that the Grand Cherokee has, JNAP could become one of the company’s higher volume production facilities.

Some truck and SUV buyers question Dodge’s decision to stray from the body-on-frame construction of the first two generations of the Durango in favor of a new unibody construction but Dodge has done so without removing the ability to do “truck stuff”. The 2011 Dodge Durango is packed full of interior goodies, soft touch panels and a plush leather interior to warranty a luxury SUV designation but thanks to the mighty Hemi, the 2011 Durango can still tow 7,400lbs. Even when equipped with the entry-level Pentastar V6, the new Durango can still tow 6,200lbs – 1,200lbs more than the highest rated 2011 Ford Explorer.

The 5.7L Hemi-powered 2011 Durango puts out 360hp and 390lb-ft of torque – an improvement of 25hp and 20lb-ft of torque and thanks to the lightweight unibody construction and Chrysler’s fuel saver technology, this more-powerful 2011 Durango is expected to yield far better fuel economy than the previous Hemi Durango. For those who don’t need the brute power of the Hemi, the 2011 Durango is one of the many new Chrysler products to offer the 3.6L Pentastar V6 and in this application, the new V6 makes 290 horsepower and 260lb-ft or torque (the new Ford Explorer makes the same horsepower and 5 less lb-ft of torque when equipped with the 3.5L V6).

The previous Dodge Durango had a nasty reputation for being a brutal gas-guzzler as they did not receive the fuel saving technology that the Ram trucks got and as fuel prices climbed during the second generation of the Durango, buyers avoided them and those who had bought them often moved onto to “greener” pastures…pun intended. The 2011 Durango features a great looking exterior, a luxorious interior, a state of the art infotainment and navigation system and a suspension setup that makes this sleek SUV a ton of fun to drive…so not only is the new Dodge Durango different than the older models in looks but every aspect of this sport utility vehicle has been enhanced to help the Durango compete in the up-and-down American SUV segment.

Check out the gallery below for a look at the 2010 LA Auto Show, which brought us the official introduction of the 2011 Dodge Durango.