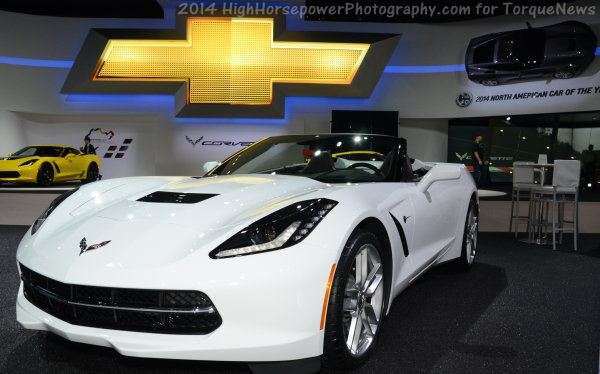 Porsche sold more vehicles in US than they have ever before while the Chevrolet Corvette saw one of its worst months since being introduced about a year ago – yet the new Corvette still moved more units than all of the Porsche cars combined…again.
Advertisement

Since the new C7 Chevrolet Corvette Stingray hit the market last October, it has been the bestselling premium sports car in America while trailing only the Chevrolet Camaro, the Ford Mustang and the Dodge Challenger in the overall performance car sales race in the US. Next to the Corvette and the American muscle cars, the bestselling sports cars in America come from the Porsche brand, but the Corvette sales have been so strong over the past 14 months that the new Stingray has routinely outsold all of the Porsche cars combined.

In November 2014, Porsche posted their best sales ever in the US market, but with those strong numbers coming largely from their two popular sport utility vehicles, the Corvette was able to once again move more units than all of the Porsche cars combined, even in a month that was one of the worst for the C7 Corvette.

Corvette Versus Porsche
In November 2014, Porsche sold more vehicles in the US than they ever have in the past, with 4,699 units sold beating their previous record month of 4,609 back in May. As has been true very often in recent months, these strong sales numbers come due to the introduction of the new (and very popular) Porsche Macan small SUV. Most other Porsche models, including the Boxster/Cayman, the Panamera and the larger Cayenne SUV all saw year over year growth last month, but the 987 Macans sold last month made the difference. In fact, if you remove the Macan sales from the total, the other Porsche models combined to make for a worse month in November 2014 than the German automaker had in November 2013.

If you add up the November sales figures for the Boxster/Cayman, the 918/911 and the Panamera, you get a total of 2,093 cars sold last month with the 911 lineup being the most popular with 945 units sold. General Motors sold only 2,378 Corvettes last month, marking the second worst sales month for the C7 generation, yet that was still enough to comfortably beat all of the Porsche cars added together.

Corvette Versus Viper
As always, I like to look at the sales figures of the Chevrolet Corvette compared to the Dodge Viper, only because they are the only two premium American sports cars. The Viper pricing starts above the price of a fully loaded 2015 Stingray while also having vastly more power, but with these being the only two American supercars, it is worth looking at the sales of the two to see how the two different American sports cars are sought after by the market. Really, a better comparison would be the sales of the new Z06 and the Viper, but that is dependent on GM breaking out the Z06 sales numbers and I expect that we won’t see that happening any time soon.

In any case, the Viper saw a huge drop in sales through November 2014 from the month before, moving just 45 units last month. There were 25 selling days in November and when you divide the Corvette’s total of 2,378 units sold, they averaged about 95 cars per day. Based on that, GM sold more Corvettes by lunch time on November 1st than Dodge sold Vipers all month, but again, it isn’t quite a fair comparison based on price and performance.

However, this shows that the C7 Chevrolet Corvette Stingray is still a very popular model among new car buyers.