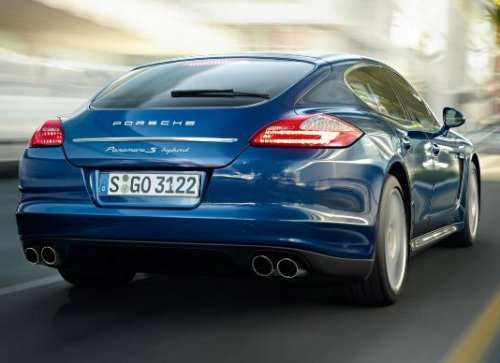 Porsche announced earlier this month that that the hybrid version of their popular Panamera sedan was on its way and as the 2011 Geneva Motor Show opened, the Porsche Panamera S Hybrid met the world.
Advertisement

The Panamera S Hybrid is powered by a supercharged 3.0L V6 making 333 horsepower, mated to an electric motor that adds 47 more horsepower to the equation. This power is sent to the wheels via an eight-speed automatic transmission and this highly efficient drivetrain is good for a 0-60 time of 5.7 seconds and a top speed of 167 miles per hour. That makes the Panamera Hybrid faster than the Panamera or the Panamera 4 and only slightly slower than those sedans in their 400hp, “S” trimline.

Most importantly, the Panamera S Hybrid is the most fuel efficient option in the lineup. While it has not received its official rating from the EPA, the European fuel economy estimate is 7.1L/100km, which converts to roughly 33.1mpg by our standards. Previously, the most efficient trimline of the Panamera was the base model, which is powered by a 300hp engine yet offers only around 27mph. This excellent fuel economy is achieved with the help of the 47 horsepower electric motor partnered with a handful of fuel saving technologies that help squeeze the most miles per gallon out of the 333hp V6.

At highway speeds, the Panamera S Hybrid clicks into “sailing mode”, in which the engine stops running and to reduce drag caused by the engine not running, a decoupling clutch disengages the engine from the transmission. Around town, when sitting in traffic or engaging in slow moving traffic, the Panamera hybrid can run strictly on the electric motor or it can assist the gasoline engine, with the hybrid unit being placed between the engine and transmission along with the decoupling clutch.

The Porsche Panamera S Hybrid offers the same exterior appearance as the traditionally powered Porsche sedans with the only indication of this being a hybrid coming in the form of the badging across the back and on the doors. Inside, Panamera S Hybrid owners receive every bit of the high end luxury that is found in the standard Panamera models including a state of the art infotainment system and plush seating surfaces. Helping to make sure that the Panamera Hybrid handles like a real Porsche, it includes the Adaptive Air Suspension with the Porsche Active Suspension Management (PASM) adaptive shock absorber system and Servotronic variable-assist power steering found in the Panamera S models.

While fuel economy numbers are not ready for the US market, the price is available and a super efficient Panamera Hybrid will set you back $95,000. This is only slightly more expensive than the Panamera 4S which offers just 24mpg while running from 0-60 in 4.8 seconds and packing a top speed of 175mph. Porsche has not given a solid release date for the US market but the announcement of the Hybrid Porsche states that it will be here “later in 2011”.