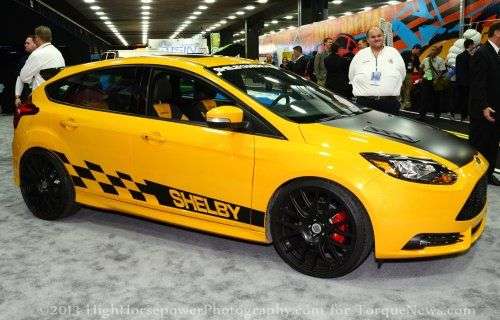 Back in the early 1980s, Carroll Shelby teamed up with the Chrysler Group to produce the Dodge Omni GLH Shelby – an affordable compact car fitted with a high performance turbocharged engine that offered similar (if not better) performance than some of the more well known performance cars of that day and it is with that “pocket rocket” thinking that Shelby has introduced their high performance, tuned version of the Ford Focus ST. Like the Shelby Omni GLH, the Ford Focus ST is powered by a small and efficient turbocharged 4-cylinder engine but unlike the old Omni, the modern Shelby Focus ST has an array of handling modifications that make it as potent on a road course as it is on the drag strip.

"Carroll Shelby's innovative and aggressive hot-rodder spirit lives on at Shelby American today. " said John Luft, president of Shelby American. "His Cobra redefined the sports car genre and then Shelby turned what some called a 'secretary's car', the Mustang, into the fire-breathing GT350. A few years later, Shelby practically invented the American 'pocket-rocket' with the four-cylinder turbocharged, front wheel drive Shelby GLH. This year, we're returning to our roots with a pair of game-changing cars that will rewrite the rules for American performance."

The Shelby Focus ST package begins on the outside where Shelby American has added functional hood vents to remove heat from the engine bay, hydro-carbon front and rear grille inserts, a hydro-carbon rear spoiler mounted high on the hatch and Shelby lettering across the carbon fiber appliqué running across the middle of the hatch. There are also three stripe packages from which buyers can chose including the Shelby checkered flag design shown on the images on the right along with more tradition Shelby stripes or “competition graphics”.

When the Shelby Focus ST really stands out is in the handling department as this high performance Shelby Focus features a new Ford Racing suspension package that offers superior cornering ability along with a sportier ride. A Shelby big brake package that includes drilled rotors and Brembo performance calipers helps handle the stopping duties while a set of huge, lightweight Shelby wheels painted matte black and wrapped in high performance tires look great and help improve handling, braking and acceleration in every situation.

Under the hood, the Shelby Focus ST as it was debuted at the 2013 Detroit Auto Show did not pack any real performance modifications aside from the free flowing Shelby/Borla exhaust package but a hydro-carbon engine cover, fuse box cover, air box cover and radiator support cover add an extra touch of sporty style to the engine bay. The good news is that Shelby is currently working on an engine tuning package that will increase the output of the Ford Focus ST from the standard 252 horsepower up into the area of 300 horsepower – a figure that supports the pocket rocket mentality that Mr. Shelby loved so much.

Inside, the new Shelby Focus ST is fitted with an elaborate Shelby interior package that includes unique embroidery on the seats with yellow and black leather that matches the bright exterior design while a Shelby branded shifter and a unique Shelby CSM serial number badge completes the interior package.

"Carroll Shelby ignored critics who said the turbo four Omni couldn't be an affordable performance car in the 1980s," noted Gary Patterson, vice president of Operations/Sales. "He proved them wrong with an impressive, lightweight four cylinder performer. Ford Motor Company's new Focus ST is the perfect platform for the rebirth of the front wheel drive turbo four cylinder Shelby. It is a car that Carroll wanted to build before his passing and is a worthy successor to his 'Pocket-Rocket' GLH."

One area in which the Shelby Focus ST differs greatly from the 1980s Omni GLHS is in the price – as the Shelby Focus ST post title package carries a fairly heavy price tag. As is the case with all post title packages, the buyer must first buy the car and then deliver the car to Shelby American for modifications that carry the additional price. In this case, the standard Focus ST starts at $24,495 with destination fee while the Shelby package tacks on an additional $14,995 for a total cost of around $39,490. Mind you, this is a figure that Shelby American refers to as “budget minded” but as far as I am concerned, $15,000 seems a little pricey for a few exterior tidbits, a new interior, suspension, brakes and a wheel and tire package but considering that the Shelby name naturally demands a higher price tag – prospective buyers probably won’t be dealing with much sticker shock when they look to soup up their sleek Focus ST.

Check out our gallery of the new Shelby Focus ST by clicking any of the thumbnails above on the right and stay tuned to TorqueNews.com for all of your top auto industry news!