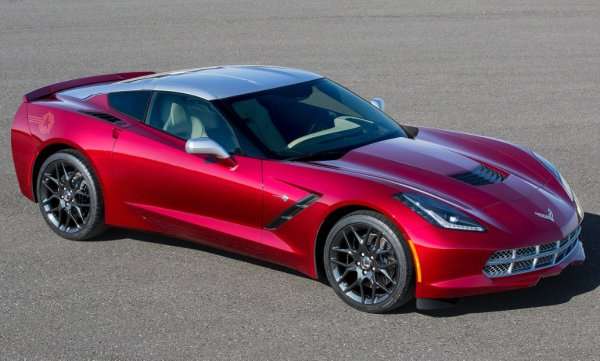 Among the large, centralized General Motors display at the 2014 SEMA Show is a 2015 Chevrolet Corvette Coupe that has been customized by Kiss guitarist Paul Stanley and while this C7 Stingray isn’t as outrageous as others around the show – the Starchild’s little red Corvette is impossible to miss.
Advertisement

Although the 2014 SEMA Show in Las Vegas exists to help companies in the automotive aftermarket show off their latest and greatest items for sale, there are two real attractions at the SEMA Show – big name celebrities and super modified show cars. At the 2014 SEMA Show, GM has their fill of both celebrities endorsing a product and gorgeous show cars, but one key show piece for General Motors is the 2015 Chevrolet Corvette Stingray coupe customized by Paul Stanley of the rock band Kiss.

This unique 2015 Corvette Stingray coupe isn’t as heavily modified as some other Corvettes on the show floor, but the fact that it is tied to someone as famous as the lead guitarist of Kiss makes it a star attraction at the 2014 SEMA Show.

Do you see what I did there? The Star attraction…and Paul Stanley’s nickname with Kiss was Starchild. Hopefully someone got that.

“It was great working with Paul Stanley, because of his vision and passion for design and automobiles,” said Jim Campbell, U.S. vice president, performance vehicles and motorsports.

Paul Stanley’s Custom 2015 Corvette Stingray
Unlike some other new Corvettes on display at SEMA this week, this 2015 Stingray Coupe doesn’t have a crazy carbon fiber body kit or a thousand horsepower engine all clad in chrome. Instead, GM built this car with Paul Stanley to show how gorgeous this new Corvette can be without major modifications.

“This car is undeniable in terms of its aesthetics,” said Paul Stanley. “And it is also a world-class piece of machinery.”

On the outside, Paul Stanley’s 2015 Chevrolet Corvette Stingray coupe wears a unique candy red paint on most of the car while the roof, rear hatch, rear spoiler, outside mirrors and grille insert are all painted Midnight Glaze Silver. On the inside, Stanley picked quilted parchment leather seats and parchment accents throughout the otherwise Jet Black cabin with dark red accent stitching throughout the cockpit. Finally, a set of Chevrolet Accessory Carbon Flash Metallic forged aluminum wheels measuring 19 inches up front and 20 inches in the rear are wrapped in high performance Michelin tires for optimal grip under hard acceleration, cornering and braking.

There are no performance modifications made to the Starchild’s 2015 Corvette Stingray, but in addition to the 460 horsepower LT1 V8 wearing the performance exhaust system, this Vette packs the new 8-speed automatic transmission and the Z51 Performance Package. This makes for one great handling American sports car that will still offer 29 miles per gallon on the highway.