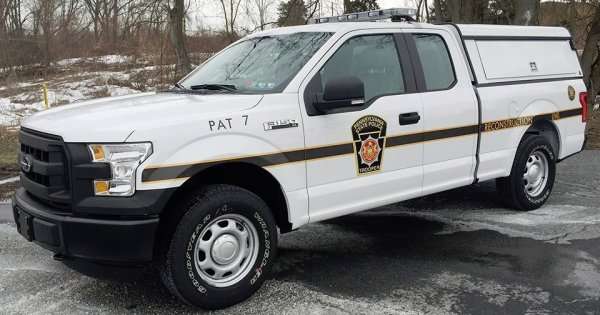 The new aluminum bodied Ford F150 continues to prove its toughness in the working world with the Pennsylvania State Police being the newest fleet to add America’s bestselling truck to their arsenal.
Advertisement

Since before the 2015 Ford F150 hit the market, Ford Motor Company has put a great deal of effort into proving that the new aluminum body was tough enough for truck work. Ford has worked with a mining company and a logging company to show how the new F150 will stand up to serious abuse, but those jobs don’t bring a whole lot of public attention to the truck. On the other hand, adding a bunch of F150 to a state police force is something that is more likely to catch the public eye – and the Pennsylvania State Police have done just that, adding 35 F150 pickups to their fleet as part of their CARS division.

PA State Police F150
While the 2015-2016 Ford F150 is better than ever, it doesn’t take a world of common sense to understand that a full sized pickup wouldn’t make an ideal police car in most situations. Sure, in very rural areas with unpaved roads or heavily wooded areas with no real roads at all, the F150 will handle the terrain a bit better than likes of the Ford Taurus or Dodge Charger police cars. With that in mind, the PA State Police force has added not as a normal police service vehicle, but instead as part of their Collision Analysis and Reconstruction Specialist division – or CARS.

The PA State Police CARS test will use these Ford F150 pickups to haul the equipment needed to investigate car accidents, so while they won’t be barreling down the highway in a high speed pursuit – they will traversing varying footing to help the police examine and recreate car crashes. The CARS team has a total of 35 members and the first group of officers will be getting their new Ford F150 pickups right away, while the rest will receive theirs later this year.

As you can see in the image above (from the PA State Police Facebook page), the special service F150 pickups coming to the mean streets of Pennsylvania are XL models with the SuperCab and the 6.5 foot bed, a safety cap on the back and a similar exterior design as the pursuit vehicles, including the LED light bar on the roof and the stripes on the side.

Although state police action isn’t exactly a big movie role when it comes to promoting a vehicle, there are undoubtedly some people who will see these PA police trucks and think “If they F150 is tough enough for the police – it is tough enough for my family”.