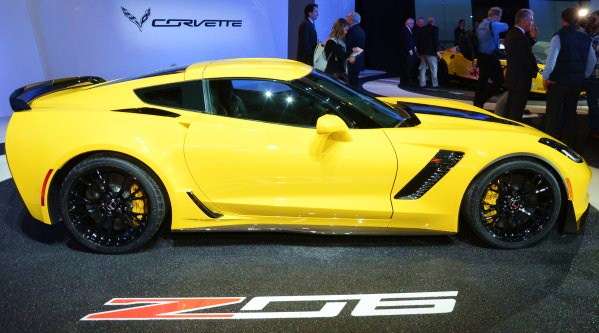 The 2015 Chevrolet Corvette Z06 will come with a “build your own engine” option similar to the C6 Z06 and ZR1, but a new report indicates that not all C7 Z06 buyers will have the option of paying to build their own 650 horsepower supercharged V8.
Advertisement

Towards the end of the 6th generation of the Chevrolet Corvette, General Motors introduced a program that allowed Corvette Z06 and Corvette ZR1 buyers to build their own engine. For $5,800, those buyers who picked the Z06 or ZR1 could travel to General Motors’ Wixom Performance Build Center – where every LS7 and LS9 for the two high performance Corvettes were hand built along with the Cadillac V Series LSA engine – to assist in the build of the high performance engine that would power their Vette. I was at the Wixom Performance Build Center to watch one buyer build his own engine and it was a very hands on program so if you had an extra $5,800 towards your Corvette – it was a really cool program.

Unfortunately, with the end of the 6th gen Chevrolet Corvette, General Motors announced that the Wixom Performance Build Center would be closing. With the Corvette no longer using the LS7 or LS9 for the Corvette, production numbers of the supercharged Cadillac CTS models being very limited (to the coupes) and only the Camaro Z/28 needing engines from Wixom, it made good sense to shutter the facility. It was quickly announced that the Build Your Own Engine program would start back up at the new engine facility in the Bowling Green Kentucky plant where every Chevrolet Corvette is built, where the Camaro Z/28 engines are already being assembled and where the 2015 Corvette Z06 LT4 engine would be built in the future.

LT4 Production in Two Locations
Every new Chevrolet Corvette built comes out of the Bowling Green facility in Kentucky so it made perfect sense to hear that the supercharged LT4 engine for the 2015 Z06 would be hand assembled in Bowling Green. The LT4 for the Z06 would be hand built in Kentucky while the higher volume LT1 engines for the C7 Corvette Stingray fastback and convertible would be built on the assembly line at the company’s Tonawanda Engine Plant in New York, right?
Wrong.

We found out a few months back that the LT4 engine for the 2015 Corvette Z06 would be built both in Bowling Green and in Tonawanda. GM is expecting big things from the C7 Z06 in terms of sales, so it would make sense that there would be some over-flow production from the small designated area in Bowling Green and with the Build Your Own Engine program rumored to be on its way back, I guessed that when demand exceeded the capacity of the Bowling Green engine team, the Tonawanda plant would produce engines for those cars purchased by folks who opted not to build their own engine.

It turns out that engine production at Bowling Green could be even more constrained, forcing GM to only allow the Build Your Own Engine program to a select number of 2015 Z06 buyers.

No Estimate on Current Build Location Figures
General Motors has told Edmunds that some LT4 engines for the 2015 Chevrolet Corvette Z06 will be built in New York and some will be built in Kentucky, but the company hasn’t decided how many engines will be built in each location. Figure that Tonawanda is a massive, high volume engine facility that churns out engines for a long list of vehicles while the hand build assembly area in Bowling Green (and in the previous Wixom Performance Build Center) are quite a bit smaller. The Bowling Green area probably cannot make enough engines for every single Z06 along with the LS7 for the Camaro Z/28 and having a regular Joe on the line, hand building an engine may slow things down even more. Because of that, GM may limit the availability of the Build Your Own Engine program in the early going, simply because the demand is far too high. When the 2015 Z06 first arrives, GM simply may not have the time to spend scheduling the build program attendees with the early demand for the LT4 engine so there will surely be some people building their own Corvette engines at the Bowling Green facility, it might be very hard to secure this option for the 2015 model year.

If you are planning to buy a new Chevrolet Corvette Z06 and you are determined to build your own LT4 engine, it would be a good idea to start pushing your local dealership for more information right away. GM may limit the numbers at first simply to avoid dealing with the scheduling headache and the high demand for these engines so if you insist on building your LT4, you may need to pull some strings right away or wait until the demand has slowed and the Build Your Own Engine program has become more readily available.

Auto Motive wrote on July 23, 2014 - 7:40am Permalink
Give me a break. Paying an added $5800 is ridiculous. I was waiting for the pricing of the new Z but since the hellcat came out with reasonable pricing its coming home with me. Why is GM waiting so long to publish pricing? Don't understand it but I know its going to hurt their bottom line. Speaking of lines, the hellcat will have them especially the first couple years. Now you will see the gray haired guys driving hellcats over the new Z.
Troll Dominator wrote on November 21, 2014 - 10:53am Permalink
Get this guy! He's mad because he couldn't wait for pricing so he went and put a deposit on a dodge.