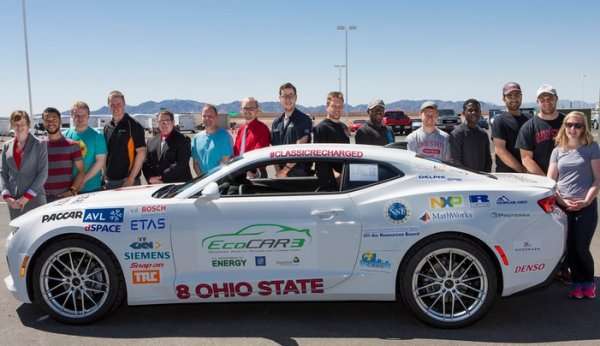 For the second year in a row, the team from Ohio State University was named the winner of the Chevrolet Camaro-centric EcoCar3 competition – beating teams from 15 other universities around the country with their custom Camaro hybrid.
Advertisement

The EcoCar3 competition began back in 2014, when 16 teams from universities around the United States took on the task of re-engineering the drivetrain of the 2016 Chevrolet Camaro to make it far more efficient without killing the driving dynamics of the American muscle car. In early 2015, the teams came together to show off their conceptualizations and from those plans, the team from THE Ohio State University was named the winner.

For the second year of the EcoCar3 competition, the teams had to take their plans from last year and apply them to the 2016 Chevrolet Camaro. The teams had to build running, drivable Camaro coupes with their own plans that would offer significantly improved fuel economy measures and lower greenhouse emissions.

For the second year in a row, the team from Ohio State University took the win, with their Chevrolet Camaro Hybrid picked as the best of the 16 entries.

The OSU Camaro Hybrid
The Ohio State Chevrolet Camaro was equipped with a custom 2.0L direct injection gasoline engine packing 160 horsepower and 225lb-ft of torque mated to a plug-in electric hybrid assist system. The 2.0L engine is fitted to a 5-speed automated manual transmission and a 150kW electric drive system with a 18.9kWh battery setup provides extra assistance to the gasoline engine. More importantly, the OSU Camaro hybrid offers 45 miles of all–electric driving and when the battery has run down, the gasoline engine fires up to convert this Camaro to a more traditional hybrid. This fuel-sipping Camaro has a top speed of 85 miles per hour while offering an overall fuel economy measure of 63 MPGge.

The 2015 EcoCar3 awards, which wrapped up earlier this month in Yuma, Arizona at the GM test center, consisted of 36 different awards and of those, Ohio State finished 1st of 16 in 11 categories. In 30 of the 36 categories, Ohio State was in the top 5 or 16, so in dominating fashion, the Buckeye Camaro Hybrid took home the EcoCar3 Year 2 overall title. Virginia Tech finished 2nd for Year 2 and Embry-Riddle Aeronautical University took home 3rd place.

The video below offers a look at the Year 2 process, when the 16 teams took delivery of their 2016 Chevrolet Camaro coupes and began preparing for the head to head competition earlier this month.