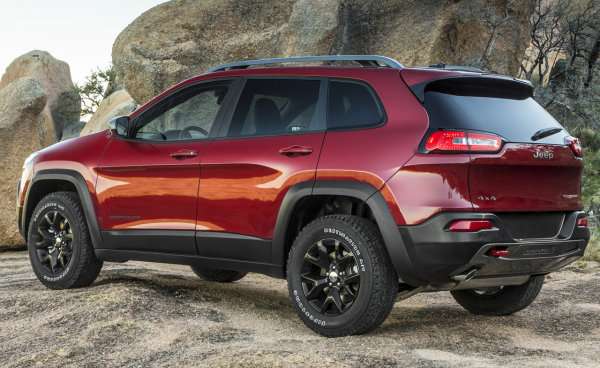 The EPA website FuelEconomy.gov has published the first official fuel economy figures for the 2014 Jeep Cherokee and with numbers of 31mpg on the highway, the striking new Jeep is towards the top of the segment in terms of both power and fuel economy.
Advertisement

The most efficient drivetrain configuration for the 2014 Jeep Cherokee is the 2.4L 4-cylinder engine mated to the new 9-speed automatic transmission and front wheel drive layout. This setup affords the new Jeep to hit 31 miles per gallon on the highway, 22 miles per gallon in the city and 25mpg combined while delivering 184 horsepower and 171lb-ft of torque. That same engine and transmission with the advanced all wheel drive system offers 21mpg around town, 28 on the open road and 24 combined. With 31 miles per gallon for the front wheel drive models and 28mpg for the all wheel drive packages, the 2014 Cherokee is the most efficient option in the current Jeep lineup.

Should buyers opt for the more powerful 3.2L Pentastar V6 engine in the 2014 Jeep Cherokee, they will benefit from 271 horsepower and 239lb-ft of torque. When fitted to the same 9-speed automatic transmission as it used with the 2.4L engine, the 2014 Cherokee V6 models with front wheel drive are able to hit 19 miles per gallon in the city, 28mpg on the highway and 22 combined while the V6 Cherokee with all wheel drive will return 19 in the city, 27 on the highway and the same 22 miles per gallon combined.

So the 2014 Jeep Cherokee is the most efficient option in the current Jeep lineup but how does it stack up to the rest of the midsized SUV segment?

Well, in terms of front wheel drive highway mileage, the top performers are the Chevrolet Equinox with the 2.4L engine, the Ford Escape with the 1.6L EcoBoost and the Mazda CX-5 with the 2.0L Skyactiv engine – all of which offer 32 miles per gallon so they offer a slight advantage over the 2014 Cherokee 4-cylinder models. Around town, the Mazda CX-5 has a huge advantage with a measure of 26mpg followed by the Toyota RAV4 at 24mpg in front wheel drive form. When you look at the all wheel drive crossovers, the Subaru Forester is the most efficient option with 32mpg on the highway and 24mpg around town. Based on the 4-cylinder comparisons, the new Cherokee isn’t the most efficient vehicle in the class – but it is towards the upper end of the spectrum in both front and all wheel drive form.

While the 2014 Jeep Cherokee sits towards the top of the list in both fuel economy and power, the fact that it isn’t tops in any category (especially fuel economy) could hurt sales in the early going. The Cherokee shook things up with the unusual/unique front end styling and with delays on production and the balmy fuel economy figures, things are going as smoothly as the Chrysler Group had hoped surrounding the launch of the new SUV. Fortunately, the SUV market is much more than just being the most efficient and with so many loyal Jeep buyers always helping to make the brand so popular, these numbers may not have much impact on the funky midsized SUV when it hits dealerships later this month.