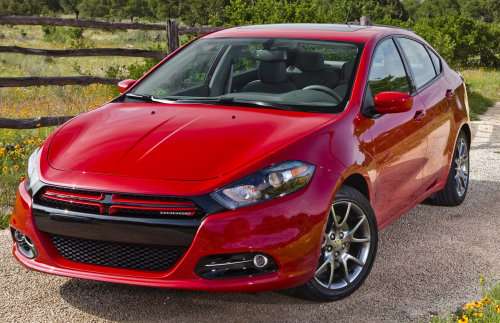 The formal entry of the 2013 Dodge Dart is rapidly approaching and last night, the folks from the Chrysler Group announced the fuel economy figures for the first models that will arrive in showrooms this summer with very good news – as the 2013 Dart will offer better fuel economy than comparable C segment models from Ford, Chevrolet and Toyota.
Advertisement

When the 2013 Dodge Dart arrives in dealerships this summer, there will be 4 trimlines available beginning with the Dart SE, followed by the Dart SXT, the Dart Rallye and the Dart Limited. The standard engine across those four trimlines is the 2.0L Tigershark 4-cylinder that produces 160 horsepower and 148lb-ft of torque while buyers of the SXT, Rallye and Limited packages can opt for the 1.4L MultiAir turbocharged 4-cylinder that makes the same 160 horsepower but this tiny turbo motor churns out an impressive 184lb-ft of torque. Click here for a look at the standard features of the 2013 Dodge Dart in all trimlines.

The 2013 Dodge Dart equipped with the 2.0L Tigershark engine and the 6-speed manual transmission has been rated by the EPA as offering 25 miles per gallon around town, 36mpg on the highway and a combined figure of 29mph total. This base model engine offers 1mpg better around town than similarly equipped Ford Focus models and 2 mpg better on the highway than the Toyota Corolla. More importantly, those 2013 Dart buyers who opt for the SXT, Rallye or Limited package fitted with the 1.4L MultiAir engine and the same 6-speed manual transmission can expect to see fuel economy figures in the range of 27mpg around town, 39mpg on the highway and a combined total of 29mpg.

In addition to offering better fuel economy than the competition around the C segment sedan class, the 2013 Dodge Dart also offers more power than any of the comparable sedans in the class. The standard 2.0L Tigershark engine offers identical power to the 2.0L engine found in the Ford Focus (160hp, 148tq) while the Dart’s entry level engine easily overpowers the Chevrolet 1.4L turbo motor (138hp, 148tq) and the Toyota Corolla (132hp, 128tq). When you step up to the more powerful and more efficient 1.4L MultiAir 4-cylinder – the Dart blows all of the competition out of the water with a torque output that is substantially better than anything offered in the standard C segment sedan group.

It should be noted that while the 2013 Dodge Dart with the optional 1.4L MultiAir engine is more fuel efficient than similarly equipped Focus and Cruze models – those two compact sedans both offer a super-efficiency model that achieves better fuel economy than the standard models. The Ford Focus SFE yields 28 around town and 40 on the highway while the Chevy Cruze Eco hits 28 and 42 to lead the class. The good news for Dodge is that the 2013 Dart will include a special Aero model that the Chrysler Group has promised will offer better than 41 miles per gallon on the highway. Should the 2013 Dart Aero achieve better than 41 miles per gallon (let’s guess that better than 41 means 42mpg), it will beat the Chevy Cruze Eco, the Ford Focus SFE and the Hyundai Elantra (29 city, 40 highway) – meaning that when the Dart Aero arrives it would officially become the most fuel efficient sedan in the C segment class. Little information has been offered on the Dart Aero package but considering the efficiency levels of the 1.4L MultiAir turbo motor and the 6-speed manual transmission – we would expect that the Aero package would feature that high powered and highly efficient drivetrain in a body that is more aerodynamic and most likely lighter than the SE, SXT, Rallye and Limited models. The Dart Aero package is expected to arrive during the third quarter of 2012.

Notice that we haven’t mentioned the 2013 Dodge Dart R/T at all…due to the late arrival of the Road and Track performance package, the Chrysler Group hasn’t announced the fuel economy figures for the Dart R/T but considering that this is a performance package – we would expect that the R/T won’t make a run at being the most efficient model in the class.

The 2013 Dodge Dart in SE, SXT, Rallye and Limited trims will arrive in dealerships soon while the R/T and Aero will arrive in the third quarter of 2012 with official fuel economy figures for those models coming closer to their arrival in dealerships around the country. We can also expect more on fuel economy figures for the models arriving this summer, especially with regard to those models fitted with an automatic transmission or the upcoming dual clutch unit.

LG's New EV Battery Plant Is a Welcome News for Tesla
Tesla Giga Berlin's New Hurdle: It's Not Only the Gov't, but Now Tesla Itself
END_OF_DOCUMENT_TOKEN_TO_BE_REPLACED