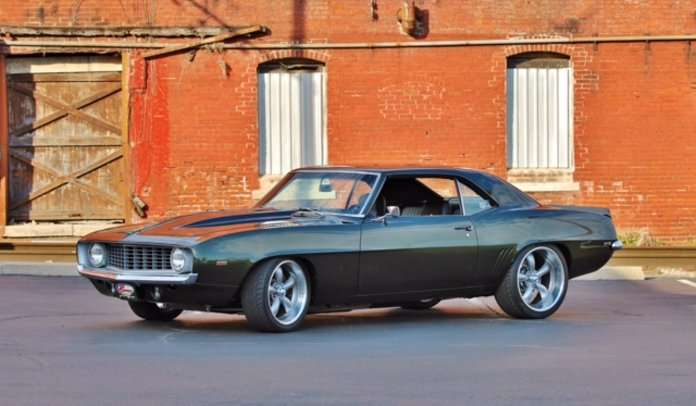 The TorqueNews/Camaros Unlimited Camaro of thee Month for October 2017 is the clean 1969 Camaro showed above, owned by Bruce Gustafson.
Advertisement

Each and every month, TorqueNews works with the members from the Camaros Unlimited Facebook page to select our Camaro of the Month. The process begins with the members of the Camaros Unlimited Facebook page – more than 41,000 of them – nominating their favorite Chevrolet Camaro owned by a fellow member of the page. Once five (sometimes six) cars/owners have been nominated, the voting begins and when the balloting closes – we have our Camaro of the Month.

For October 2017, the Camaro of the Month is the great looking 1969 Chevrolet Camaro above, owned by Bruce Gustafson. We spoke to Bruce about his 1st gen Camaro and below, you will find his story, which has an interesting twist. It turns out that this Camaro was actually a gift for a soldier from his wife, upon returning home from serving overseas.

The Story of Bruce Gustafson’s 1969 Camaro:
In 2009, I was deployed as a member of Air National Guard (ANG) to Northern Iraq. Upon my return home from my overseas deployment, my wife Alyce had a gift of a lifetime awaiting me in our garage.

From my earliest days, I've always loved the look of the 69' Camaro and hoped to own one someday. Over the years, every time I would see a 69' Camaro, I would stop and relive that childhood dream of owning one. My dream was finally realized, when my wife made the purchase of a 1969 Camaro and gave it to me upon my return home.

The car was in need of a lot of work, it was in need of a ground up restoration. My desire and initial plan was to do the build myself, over a few years. As luck were to be, after disassembling the car and acid dipping it. I found one of the best hotrod shops in the south. I took my Camaro to Ronnie's Hotrod shop in Senatobia, MS to do the metal repair and start the construction phase.

Shortly after I delivered my car to Ronnie's, I took a job transfer which moved me hours away and a living arrangements, which would not allow me to work on it. My wife stepped up again, she said why don't you just let Ronnie build the car for you. My desire to have it completed outweighed the desire to do the build myself. My wife had a few restrictions for the build though. Alyce wanted an automatic transmission installed, so if she wanted to drive it she could, she want AC installed and once I talked about painting it green she wanted me to follow through with that decision.

After a little over a year and a half build, I took delivery of my 69' after a complete ground up restoration. Since the Spring of 2011, I have put 13,000 miles on this beautiful driver. The 700R transmission developed an issue with reverse near the end of the show season late in 2015. The automatic transmission was a feature that my wife had requested during the build. Since taking delivery in 2011, Alyce had not driven this Beauty, I decided it was time for a real transformation, instead of repairing the 700R, I replaced the automatic with a TREMEC TKO 5 speed. This transmission swap transformed my car into a whole new car, and a lot more fun to drive.

A new set of tires will be needed soon which I will update its look with a new set of rims as well. The rear suspension is a leaf spring setup that can be very stiff at times and I would like to upgrade the rear shocks with a set of adjustable shocks to soften my ride.

In the end my license plate says it all. "THK U A", an ongoing show of appreciation to my wife for buying this car for me and then allowing me to build the car the way I wanted.