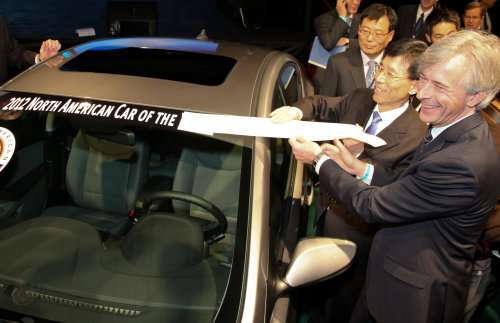 The North American Car and Truck of the Year panel has announced their short list for the 2013 award with the 50 jurors having whittled down the group to 11 cars and 9 trucks/sport utility vehicles that will go head to head for the awards that will be announced at the 2013 North American International Auto Show at Detroit’s Cobo Hall.
Advertisement

The 50 North American Car and Truck of the Year jurors have selected 11 cars with 5 of those being from the American Big 3, 5 of those being from Japanese automakers and 1 being from Germany. Interestingly, the NACTOY panel opted to include both the Scion FR-S and the Subaru BRZ even though the vehicles are identical in every way except for badging and the level of standard interior amenities. If one of those cars was to win over the other – we have to imagine that it will come down to interior features but I suspect that the competition between the two identical cars could essentially eliminate both of them. The car list also has an interesting spread in pricing with low cost models like the Nissan Altima, the Dodge Dart, the Ford Fusion and the Chevrolet Malibu along with pricier models like the BMW 3 Series, the Cadillac ATS and the Toyota Avalon.

For the class technically known as the North American Truck of the Year, there is but a single real truck in the running for the 2013 award and that is the new high tech Ram 1500. The other 8 vehicles in the “Truck of the Year” class are all sport utility vehicles with another wide range in pricing beginning with affordable models like the Ford Escape, the Ford C-Max, the Mazda CX5 and the Hyundai Sante Fe and heading up to far more expensive models like the Acura RDX, the Audi Allroad, the Infiniti JX35 and the BMW X1. The last time that an actual truck won this award was in 2009 when the Ford F150 took the top honors. Ford technically has the best shot of winning truck of the year for 2013 due to the fact that they have two models in the running – even though one is the Ford C-Max that is really a hard sell as a truck or even an SUV.

As we get closer to the official announcement of the 2012 NACTOY awards at the Detroit Auto Show, the group will announce the finalists and from those models the two winners will be chosen.