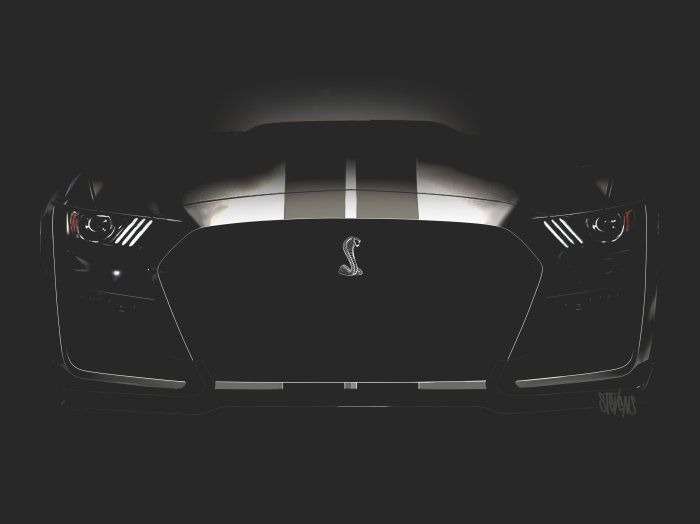 Newer spy shots showing what appears to be a 2020 Ford Mustang Shelby GT500 test mule will a roll cage have led some people to suggest that the supercharged pony car will be so fast that a safety cage will be standard, but regardless of the performance capabilities, that is highly unlikely.
Advertisement

While we still don’t know when the next GT500 variant of the Mustang will make its grand debut, Ford Motor Company has made it very clear that a hotter Shelby-badged pony car is on the way. Rumors suggest that the car will be introduced at the 2019 North American International Auto Show in Detroit next January as a 2020 model and when it arrives, we know that it will have more than 700 horsepower.

Power aside, the upcoming Shelby GT500 is expected to be the highest performance Mustang of all time, with premium suspension, braking and aerodynamics systems all working together to make this Ford a beast on the street, the drag strip and the road course. With that in mind, it comes as little surprise that the Motor Company is doing some serious track testing and recent spy shots (which we don’t have permission to use, but you can check them out on Autoblog) prove that Ford is putting the GT500 through its paces ahead of the debut.

The Cage
In those spy shots, the new Mustang has a low profile rear spoiler and an interesting staggered-offset wheel design, but what has gotten the most attention is the roll cage. It is hard to tell how elaborate of a cage has been installed in the GT500 test car, but if they are doing heavy track testing, something as simple as a harness bar would make the car far safer for the test drivers.

However these images of a Mustang being tested with a roll cage has sparked some discussion about the GT500 coming with a safety cage system of some sort, but due to federal crash safety standards coupled with the legal ramifications, it is all-but-guaranteed that the new GT500 will not come from the factory with a cage of any kind.

Crash Safety Standards
A roll cage and/or harness bar are designed to keep the occupants safe in the event of a crash during motorsports activities and because of that, many people assume that a cage would make a street car safer. In speaking with interior design experts from a handful of automakers, cages actually make a car far less safe based on federal crash safety standards.

During a simulated crash in testing, the engineers study the impact of everything in the car on the crash test dummies. Adding a roll cage basically gives the heads of the dummies something to bounce off of during the crash. This isn’t an issue for race cars and drivers, as they all have helmets on, so the roll cage prevents the race car from crumpling up during the impact and the helmet prevents anyone’s heads from being smashed by the cage bars. During federal testing, the dummies don’t wear helmets, so the inclusion of a bunch of intrusive, metal tubes in the interior makes a car far more dangerous in normal driving situations.

This issue has played a key role in the past in preventing automakers from including a safety cage as a factory-installed item, so there is almost no chance that the 2020 Mustang GT500 will have a cage or harness bar as either standard or optional equipment from the factory, as anything that is included in normal production is subject to crash safety standards.

However, Ford could be looking to do something like what Dodge did with the Challenger Demon, where those folks who buy the car can order a cage or harness bar from Ford Performance after the receiving the vehicle. Items installed by the owner, even if purchased from Ford Motor Company’s performance division, are not subject to crash safety standards, as they come with all sorts of legalese about how they should only be used in certain conditions.

In short, the safety cage seen in the recent GT500 spy shots could be in the development phases for Ford Performance, but unless the Motor Company found a way around the problems created by a cage or harness bar under federal crash regulations, the reinforcing tubes will not be a factory feature.