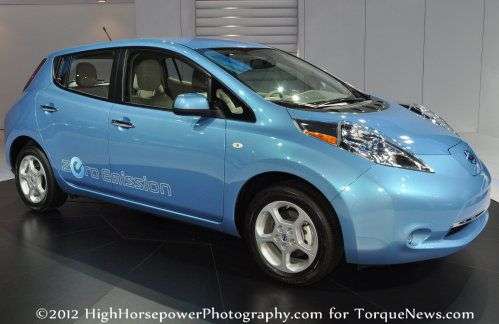 The Nissan Leaf bests the Chevy Volt in January 2012

The battle of the mainstream electric vehicles headed into its second full year with the start of January 2012 and when the month came to an end – the Nissan Leaf had outsold the Chevrolet Volt by a narrow margin.
Advertisement

Even though the Chevy Volt had a strong finish to the 2011 calendar year, beating the Leaf in sales volume each of the last three months of last year, the Nissan pure electric vehicle won the battle for the year. Chevrolet had hoped to carry the momentum from the end of last year into the beginning of 2012 but by a margin of just 73 vehicles – the Leaf beat the Volt in the first month of 2012.

The Nissan Leaf moved 676 units last month as the Japanese automaker continues to fill orders from the initial batch of 20,000 planned for delivery last year. Nissan fell short of that lofty goal, due greatly in part to the sequence of natural disasters that hit Japan last year but that didn’t stop the Leaf from beating the Volt in overall sales through 2011. Nissan sold 677% more Leaf electric vehicles in January 2012 than they did in January 2011 – improving on the mere 87 examples sold last year to 676 this year.

The Chevrolet Volt saw sales climb by almost 100% from January 2011 to January 2012 but that wasn’t enough for the electric Chevy with a range extending gasoline engine to beat the less expensive, pure electric Nissan Leaf. Interestingly, this slow month comes after General Motors announced the fix for the possible fire risks that occur in violent side impact/rollover accidents and the US government announced that there was no need for further action and the investigation was closed. However, when the investigation was in full swing late last year, Volt sales were as strong as they had been all year and that helped the Volt to outsell the Leaf each of the last three months of 2011.

One of the key changes for the Chevrolet Volt is that the Hamtramck plant in which the Volt is produced was retooled for 2012 and with that, the factory can now produce Volt sedans at a higher rate as the car becomes more readily available around the country. Also, Hamtramck is the production home of the Opel Ampera and there are still lingering rumors that the other GM brands (Buick, Cadillac) could see their own vehicles based on the Voltec drivetrain in the near future. The key point for GM right now is to get the Volt to as many locations around the US as possible for consumers to come and experience while Nissan is still trying to fulfill the orders taken online during the months before the Leaf became available.

Nissan, on the other hand, used the 2012 Detroit Auto Show to show off the new electric version of the NV2000 van, which uses a similar drivetrain design to that found in the Leaf but with modifications for the extra weight of the roomy cargo van.