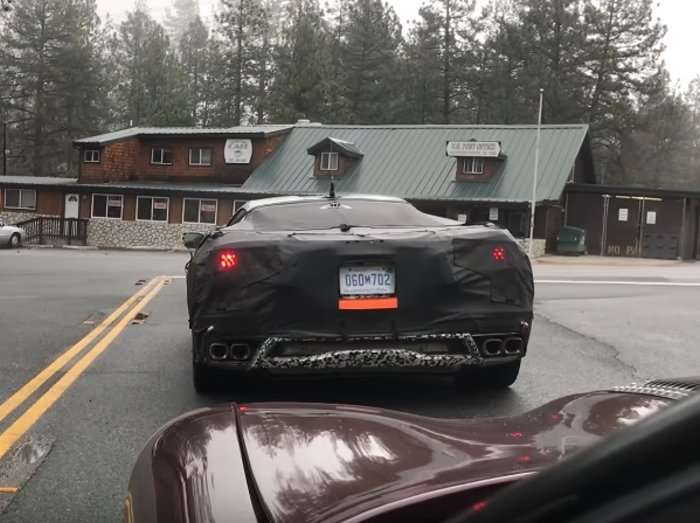 A Corvette owner cruising near Idyllwild, California caught video footage of a pair of Corvette mid-engine test cars on the road, giving us a look at the heavily-disguised supercars from the front and rear.
Advertisement

While General Motors still hasn’t offered any official information on the existence of a mid-engine Corvette project, it is all-but-certain that there is a Chevrolet supercar with a midship design on the way. We don’t know when it will arrive, but spy shots and videos captured around the country have made it clear that a new era of the American sports car is close, and this new video gives us a great look at the long-rumored mid-engine Corvette – albeit through heavy camouflage.

C5 Corvette Find the Mid-Engine Corvette
This new video showing what the world believes to be the long-awaited mid-engine Corvette begins with a C5 Corvette owner cruising along a curvy road somewhere near Idyllwild, California. The early footage shows the road behind the C5 as the owner carves the corners, when we see a pair of camouflaged test cars going the other way.

The Mid-Engine Corvette Up Close
When the driver of the C5 Corvette first catches up to the mid-engine Corvettes around the 1:49-mark of the video, we get to stare at the masked rear end of the new Chevy supercar. The car is wider and flatter than the current Vette, with quad tailpipes mounted in pairs in the outer corners of the lower fascia.

Around the 1:59-mark, the camera is in front of the mid-engine Corvettes and from this angle, this car appears to maintain the front end shape of the Corvette, even under the black camo materials. As the video moves on, the C5 continues to chase the test cars and as they slither along the curvy roads, we can see that these cars appear to have a longer rear end and a shorter front end – the perfect dimensions for a mid-engine car.

Unfortunately, the guy who caught these cars on video has a C5 Corvette that is clearly modified, so it is quite loud. As a result, we cannot hear the mid-engine Corvette test cars over his exhaust, but this video is the steadiest close-up video we have seen at the car that might be the C8 Corvette.

Check out the video below!